Rennes fought back from behind to complete a historic 3-1 victory against Arsenal in their Europa League last 16 clash first leg on Thursday evening.

Arsenal silenced the raucous crowd in Brittany after just three minutes, as Alex Iwobi inadvertently found the back of the Rennes net after his low cross from the left hand side evaded everyone to bounce in off the far post.

If the Gunners began the first half positively, the conclusion of the half was a stark contrast, as Greek defender Sokratis Papastathopoulos picked up a second yellow for a foul on Ismaila Sarr.

Bourigeaud hammers home the rebound from the resulting free-kick

​Arsenal's misery was then truly compounded as the hosts found their equaliser from the resulting free kick, as midfielder Benjamin Bourigeaud curled an effort into the wall before thundering in a glorious shot on the bounce from the rebound into the top corner to send the Rennes faithful into raptures.

Rennes completed the turnaround just after the hour mark, as an unfortunate Nacho Monreal deflected Mehdi Zaffane's cross past Petr Cech. Sarr wrapped up the scoring for Rennes, thundering a header in at the back post, meaning that Unai Emery's men have work to do if they are to progress to the quarter finals of the Europa League. Arsenal could not have wished for a better start to the game, as they silenced the excitable Rennes crowd within minutes through Alex Iwobi's rather lucky goal. It then seemed as though Unai Emery's side would take control of the game and build on their away goal.

Whilst Sokratis' red card was a huge blow to the Gunners' chances of winning the game, conceding so soon after the dismissal was probably even more pivotal, as it gave Emery no chance to tinker with his tactics to attempt to hold onto their slender lead and frustrate Rennes. 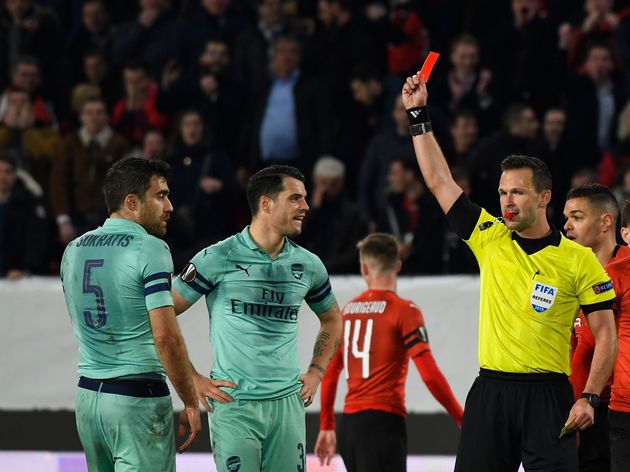 With ​Manchester United visiting the Emirates in just three days' time, the Gunners could have done without the extra mileage that comes with playing a large portion of the game with ten men. They will still fancy their chances to progress in the tie, despite the defeat. 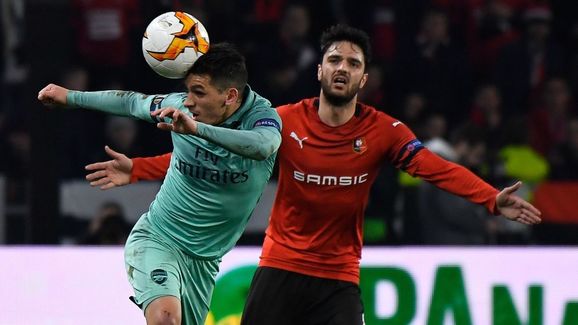 The 23-year-old was also one of the few Arsenal players who looked competent in possession, with the Gunners struggling to keep the ball against the Rennes press throughout the match.

He will be a huge miss for the north London side on Sunday, as he serves the first game of a domestic suspension.

Rennes, who currently sit tenth in Ligue 1, have another home game on Sunday, taking on struggling Caen at the Roazhon Park.

Arsenal face an in form Manchester United in their next Premier League match on Sunday. Ole Gunnar Solskjaer side will arrive at the Emirates on a huge wave of momentum, having qualified for the quarter finals of the Champions League on Wednesday night against Paris Saint Germain.