Arsenal have been handed a last 16 tie with French side Rennes in the Europa League after successfully overcoming BATE Borisov on Thursday night.

At first glance the draw would appear a favourable one for Unai Emery's men, having avoided the likes of Napoli, Inter, Chelsea, Sevilla and Valencia to instead face the short trip to east France as they bid for Europa League glory. That said, Rennes have made club history already this season and will likely prove anything but easy opposition for the Gunners.

Here take a look at ​Arsenal's upcoming opponents and tell you everything you need to know about Les Rouges et Noirs.

​How Did They Get Here?

Rennes earned their place in the last 16 after defeating Real Betis 3-1 in Spain on Thursday to secure a 6-4 aggregate victory for Julien Stephan's side.

The first leg was an engrossing encounter that ended 3-3 to leave the tie hanging in the balance ahead of the return leg at the Estadio Benito Villamarin. The home side led 3-1 in the first half through Adrien Hunou, a Javi Garcia own goal and Hatem Ben Arfa, while Giovani Lo Celso pulled one back before Sidnei and Diego Lainez both netted in the second half to leave the tie finely poised ahead of the return leg.

However, the French side defied the odds though with goals from Ramy Bensebaini, Hunou and M'Baye Niang enough to secure an impressive 3-1 victory and set up a tie with last season's beaten semi finalists. During the group stages Rennes endured an indifferent six games, winning three and losing three as they finished one point ahead of FC Astana as runners up in their group behind Dynamo Kyiv.

How Have They Previously Fared in Europe?

Rennes have already made history twice this Europa League campaign, as making it past the group stages resulted in the first ever European knockout tie in the club's history. Of their previous five Europa League/UEFA Cup seasons they had failed to make it past preliminary qualifying rounds on two occasions. 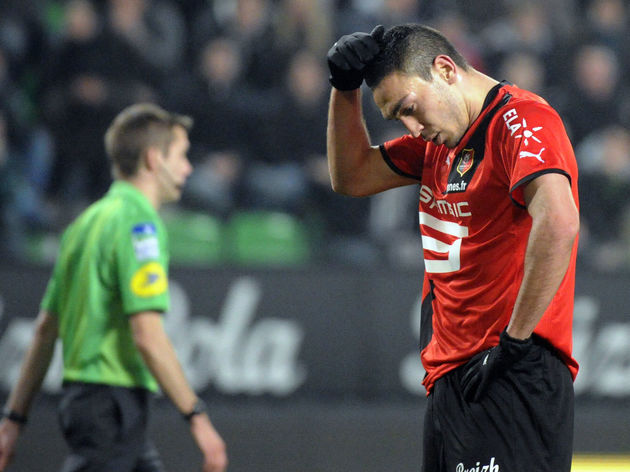 The three times the club had made it to the group stages they struggled, finishing fifth two times and fourth in the 2005/06, 2007/08 and 2012/13 seasons respectively. Naturally, their last 16 showdown with Arsenal has surpassed their previous best, as the celebrations following the Real Betis match clearly showcased the importance of the French side's achievement.​

Somewhat unsurprisingly, their showdown with Arsenal will go down in history as the club's first ever encounter with an English side in any competition. However, it won't be the first time they have faced British opposition in Europe. They faced Rangers in the European Cup Winners' Cup first round in 1972, but lost 2-1 on aggregate to the Scottish side, having drawn the home leg 1-1. More recently, they faced fellow Glasgow side Celtic in the Europa League group stages in the 2011/12 campaign, earning a 1-1 draw at home before losing 3-1 in the reverse fixture in Scotland.

The French side are failing to live up heights of their impressive Ligue 1 campaign last year, with the club currently sitting in the bottom half of the league. That said, only four points separate Rennes in 11th with Marseille in fourth as, barring PSG, Ligue 1 continues to be an unpredictable competition.

In order to qualify for this season's Europa League, under the tutelage of former manager Sabri Lamouchi the club achieved a record fifth finish last year, automatically earning the club a spot in the group stages.

1932 - Julien Stéphan is the first Rennes boss to win his first two games in Ligue 1 since the first manager in Stade Rennais history in the top-flight: Kalman Szekany, in September 1932 (also 2). Promising. pic.twitter.com/RpvcpQKh1C

Having failed to rekindle the form of last year, Rennes parted company with Lamouchi last December and appointed Julien Stephan on an interim basis. He made his mark immediately, with positive results in the league and victory over FC Astana in the Europa League handing him the permanent job just nine days later.

As a result, their domestic form has improved and they will be hopeful of securing a top half finish for the ninth time in the last 11 seasons.

Who to Look Out for

The most notable member of the squad is the mercurial Hatem Ben Arfa, who ​Premier League fans will be familiar with due to his four-year stay on Tyneside with ​Newcastle. Since leaving the north east the forward has returned to France, playing one impressive season at Nice before PSG snapped him up a year later. A mixture of poor form and disciplinary issues meant his time in the capital was less than fruitful. He netted just four times in his first season before spending the entire 2017/18 campaign without making a single competitive outing for Les Parisiens. The 31-year-old seems to have found a new lease of life at Rennes, though. Since joining the club in September he's bagged five goals in 18 league matches and could pose a serious threat to a shaky Arsenal defence.

Another player familiar to English supporters will be ex-Watford loanee M'Baye Niang. The Senegalese forward is on loan for the season from Torino and has chipped in with five league goals on his own.

Rennes winger Ismaila Sarr has been linked with a move to Arsenal recently...

And he's just scored this absolute rocket vs Astana 

It's easy to see why big clubs are sniffing around  pic.twitter.com/cndVPN5jBj

Nonetheless, the real danger man for Arsenal is top scorer Ismaila Sarr, whose eight goals and six assists in the league attracted the attention of some Premier League clubs in the January window, as the striker has flourished since being move up front from his regular position on the wing.

Where Do They Play

Roazhon Park is the home of Rennes, and has been since its inauguration back in September 1912. The stadium holds a capacity of 29,778 and has been selected as one of the venues for the upcoming 2019 FIFA Women's World Cup in which it will host six matches: four in the group stage, one in the round of 16, and one semi-final.

When Are the Ties Set to be Played?

All Europa League round of 16 ties are set to be played on March 7th and March 14th.

As Arsenal were drawn first out of the hat then they will play the first leg at home at the Emirates on March 7, with the return leg at Roazhon Park.