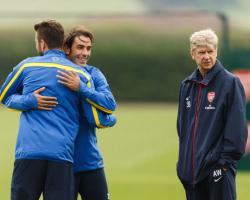 The 67-year-old continues to split opinion among Gunners' supporters, with a growing number holding high-profile protests and calling for Wenger to leave when his current deal expires at the end of the season

Arsenal have lost six of their last nine matches, which has seen them dumped out of the Champions League and left facing a battle to finish in the top four of the Premier League

The 43-year-old told Spanish radio station Cadena SER he believes Wenger has the desire to remain, but things have to be done differently going forwards

"In my opinion, he will renew his contract, at least for one season

He is motivated and willing," Pires said

"Arsene has an offer on the table

He has the backing of the owner

They are in the FA Cup semi-finals.

"He has to continue and if he does, he needs to change many things

That is the most important thing for him and for Arsenal.

"We will see what happens."

Spanish forward Lucas Perez was signed by Wenger from Deportivo La Coruna during the summer, and believes the Gunners boss "is an icon".

"I would like him to continue, but that's his decision

He has not communicated his decision to the team or the club yet."