Rosicky to remain with Gunners 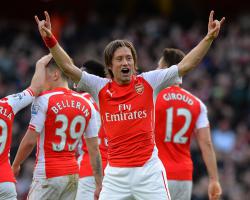 The 34-year-old has been on the fringes of the squad this season, making only five starts in the Barclays Premier League.

However, Wenger insisted the former Borussia Dortmund playmaker remained integral to his plans for 2015-16.

Asked if he expected Rosicky to stay, Wenger replied: "Yes."

The Arsenal manager added: "We have taken up the option (of a one-year contract extension)."