Sanchez- Arsenal had an okay season 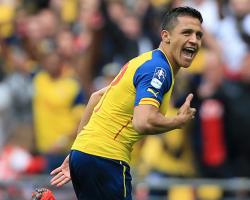 The Chile forward is away on international duty with Chile as they host the Copa America.

The 26-year-old, signed in a ÃÂ£30million deal from Barcelona last summer, was the stand-out player for the Gunners, capping a memorable campaign with a superb goal in the 4-0 FA Cup final win over Aston Villa at Wembley.

However Sanchez feels, with the talent of Arsene Wenger's squad, there remains a sense of what might have been after seeing their title challenge fade despite a strong second half of the campaign, and disappointment in exit from the Champions League to unfancied Monaco.

"It was an okay season, but it was bittersweet

I would have liked to have been in the Champions League final, to have won the Premier League title," Sanchez told a press conference ahead of Chile's first Copa America match with against Ecuador on Friday.

I believe we have a bunch of skilful players so to not achieve more is disappointing."

Sanchez scored 25 goals for the Gunners, and set up many more.

He added: "I had a breakthrough in my football life

Now I switch to the left, I make goals, I pass, I am evolving

"And if I am put in at centre forward, I will do it in the best way possible and I am fit to play."

Arsenal are expected to strengthen the squad again in the summer, and continue to be linked with a move for Chelsea goalkeeper Petr Cech.