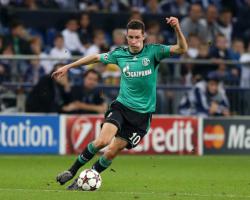 'I am very sure that Julian will not only play the second half of the season for us, but also probably beyond,' the Schalke boss told a press conference in Gelsenkirchen.'We are happy that we have a world-class player in our ranks.'With the transfer window to close at midnight on Friday, the 20-year-old attacking midfielder has been strongly linked to Arsenal.According to UK reports, the Gunners had sent a delegation to Germany to negotiate a fee with Schalke, which Heldt flatly denied."I've checked in my office to see if there was anyone sitting and waiting, but there was no one there," he said tongue firmly planted in cheek."We are not interested in letting Julian go and he has also not come to us with the wish to leave the club."Of course, there is always interest in him and if someone was to come and make a serious offer for him, then we would have to deal with that professionally."That applies not only for Julian, but for any other player."Draxler has a contract with Schalke until 2018 and Heldt denied there is a buy-out clause of 45.5 million euros (US$61.81m) in his contract."That agreement was last year, now the transfer fee is freely negotiable," said Heldt after Draxler signed a two-year contract extension in May last year.Draxler has won 10 caps for Germany, but is currently out with an ankle injury.Arsenal manager Arsene Wenger is a fan of the German midfielder and the Frenchman joked earlier this month that suggestions the Gunners were about to sign Draxler were comparable to UFO sightings."That (rumour) is like an unidentified flying object -- some see them everywhere," Wenger said in response to reports that Draxler had visited Arsenal's training complex in Hertfordshire