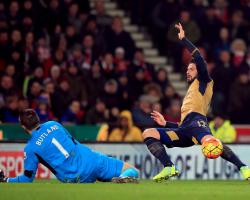 The Gunners needed just a point to nudge back ahead of Manchester City and Leicester at a stadium where they have only won once in the Premier League era, and they were attempting to break their Britannia Stadium hoodoo without injured playmaker Mesut Ozil.

Only the brilliance of Stoke keeper Jack Butland stopped them entering the half-time interval ahead as he spread himself to thwart Olivier Giroud in a one-on-one situation.

His heroics were then emulated by a man 11 years his senior as Petr Cech kept out Joselu and Bojan Krkic in quick succession before saving with his feet from the former late on to record the 172nd Premier League clean sheet of his career.

The Gunners were without German midfielder Ozil, the man leading the Premier League in assists, due to a foot injury while Alexis Sanchez was not included either despite nearing a return from a hamstring problem.

Ozil posted a picture on Twitter of him watching the game from a sofa and it was clear his team-mates were missing his guile in the opening 45 minutes in Staffordshire.

And while Stoke are a far different proposition from the Tony Pulis sides which used to cause the Gunners such problems, there was also little evidence of the attacking verve that had dismantled both Manchester clubs and Chelsea here this term.

The only early glimpse of their creativity came 20 minutes in when Marko Arnautovic's flick around the corner was blasted wide by Ibrahim Afellay.

Moments later Joel Campbell's incisive pass at the other end set Giroud through one-on-one and Butland rushed out and made himself big to block the Frenchman's left-footed try.

Joe Hart's England deputy was needed again before the interval to help Alex Oxlade-Chamberlain's shaped shot over the crossbar, with the Southampton academy graduate seeing a shot from the resulting corner diverted wide by an unsuspecting Laurent Koscielny.

The two sides entered the break on level terms, after Stoke had been 3-0 ahead at the same point in last season's fixture, and only another fine Butland save prevented Arsenal from taking the lead 66 seconds after the restart.

From Aaron Ramsey's corner Giroud lost Ryan Shawcross and guided his header down towards the near post only to see Butland get across and frustrate him once more.

Referee Craig Pawson was keeping his cards in his pocket in an increasingly scrappy game, and he remained unmoved for half-hearted penalty shouts against Philipp Wollscheid on Giroud and Theo Walcott.

The Austrian fed Joselu, who cut on to his right foot, took aim from the edge of the box and forced Cech into a terrific one-handed save, with the 33-year-old then springing back up to prevent Bojan from squeezing the rebound in at the near post.

The Potters nearly mustered a late winner when Jonathan Walters' header from a corner was cleared off the line by Ramsey before Cech stopped Joselu once more, this time with an outstretched leg.

"#Goalkeepers showing their class tonight, @PetrCech @JackButland_One" - former Arsenal and England keeper David Seaman knows a thing or two about the art and enjoyed what he saw ( https://twitter.com/thedavidseaman/status/688774986484576256)

Arsenal counterpart Petr Cech ran him very close in the end, but it was the Stoke and England goalkeeper - not for the first time this season - who produced the real stand-out performance

Made three key saves, twice denying Olivier Giroud either side of keeping out an Alex Oxlade-Chamberlain shot.

Having done a great job of containing Arsenal, Stoke almost stole a victory in the closing seconds of the game - but after Aaron Ramsey cleared off the line from Jonathan Walters, Cech stuck out a vital foot to block Joselu's rebound effort.

This really has been a bogey ground for Arsenal over the years, so while possibly frustrated that his side could not make the most of their chances, Gunners boss Arsene Wenger will surely be content enough with a point that takes them back to the top of the Premier League.

Stoke manager Mark Hughes will be delighted to have seen his men once again cause problems for high-profile opponents.

Abuse directed towards Wenger from the Britannia Stadium stands might be understandable to a degree given some of his comments, but the grief Ramsey gets at this ground is not

It relates to an incident in which the Arsenal midfielder suffered a horrific broken leg - and that incident was six years ago.

The goalkeepers were the focus of the post-match discussion and Hughes told Sky Sports 1: "They had to make key saves, but that's why you have top-class keepers

"Cech's been a top-class keeper for many years and we've all seen the potential of Jack - I think he'll be at the stature of Cech in the future."

Cech said: "We did well in the first half and had the chance to score but Jack made a good save

"The second half the momentum shifted a little, they had some chances but he made another good save from the (Giroud) header.

"I was pleased with my contribution, in the second half I managed to keep it 0-0.

We were coming here hearing we were going to lose again, but we showed we can compete and we'll take the point and move on

We're in the position we wanted to be."

Butland said of his first-half save from Arsenal's frontman: "Giroud got in a good position and you've got to assess whether you can make the ground up and make the block

"The second one, at the start of the second half, you're not wanting to lose that momentum."

On his opposite number, he added: "His record speaks for itself but what impressed me was that in the first half he had no saves to make, but in the second half when they came under pressure he was there when they needed him

"It's not just the saves, it's how you relieve the pressure on your defence."