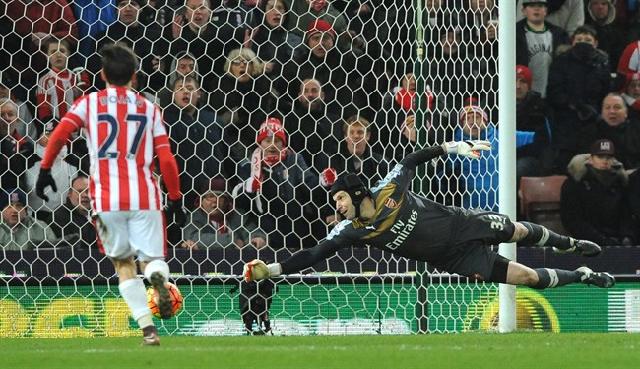 The big surprise of the match was the Arsenal squad, without Sanchez and without Ozil. Oxlade-Chamberlain would play in the Number 10 spot.

The first half was a tight affair with few good chances, the second half saw the game become stretched and both teams had chances, Stoke most of the good ones.

Arsenal looked uncomfortable in possession, gave the ball away a number of times and the referee allowed the game to become physical, meaning the game lacked finesse and precision.

The Gunners created a couple of chances in the first half, the best coming at the twenty minute mark when Joel Campbell slipped a through ball to an open Giroud, who shot at the keeper.

Oxlade-Chamberlain would test the Stoke keeper later in the half, Butland tipping his shot over the bar.

Arsenal had just two good chances in the second half, the first a Giroud header off a corner producing a fine Butland save. Campbell curled the second chance past the post. Arsenal also had a couple of shouts for a penalty, but these were never likely.

Stoke produced the best chances of the half and Cech made a number of sensational saves. Joselu was robbed by Cech early in the half, who parried his shot to Bojan, who couldn’t beat Cech.

Walters had a header cleared off the line by Ramsey to Joselu, whose follow up shot was saved by the Cech’s feet.

In the end Arsenal hung on for a point, but now have missed out on an opportunity to grab control of the table.

Cech  8:  A fabulous display from Cech. He made a number of good saves, punched a couple of dangerous crosses away, and was my man of the match.

Bellerin 7:  A tough game, but he made few errors and helped keep Stoke at bay. He got forward several times, but couldn’t deliver any killer crosses.

Mertesacker  7: He was generally very solid, although he did make a couple of sloppy passes that created some problems.

Koscielny  7:  Almost exactly the same as Mertesacker. Lost track of Joselu a couple of times.

Monreal  6:  He had a difficult time with Walters and Johnson and they restricted his attacking. Was not really involved in any significant attack that I can remember.

Flamini  6:  Helped to motivate the Gunners to defend and he provided some valuable cover for the defence, but our midfield was not dominant today.

Ramsey 6:  He worked hard, but he was unable to get into a good shooting position or to make any key passes.

Oxlade-Chamberlain  6: Big shoes to fill today and it showed. He had his moments, including a couple of decent shots, but he couldn’t break down the defence and his energy levels were wanting near the end, when he couldn’t create enough space for himself.

Campbell  7:  Worked hard, created a great chance for Giroud, had one for himself where he could’ve done better.

Giroud  7: He had two good chances and forced the goalie to make two good saves. He battled hard the whole day, but couldn’t score the needed goal.

Walcott  5:  The game largely passed him by and he made little impact. He was shoved off the ball time and again and the referee gave him no relief.

Iwobi  6:  He played a few good minutes and gave the team a little energy, but seemed a little tentative when he got the ball near the box.

Chambers  n/a:  Came on to help run down the clock.