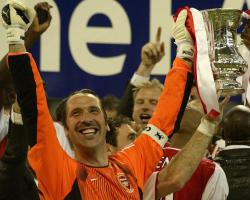 Poland international Szczesny has seen his position at the Emirates Stadium usurped by Colombian Ospina since the turn of the year following some poor performances coupled with negative off-field headlines when he was caught smoking in the showers after a defeat at Southampton.

Szczesny, though, is expected to be back between the posts for Saturday's FA Cup semi-final against Reading at Wembley.

Seaman - who made 564 appearances for the Gunners between 1990 and 2003, the England international winning eight major trophies, including the double twice - sees no reason why 24-year-old Szczesny cannot use the experience as a positive to better himself for the seasons ahead.

"With Wojciech, it must be hard for him now to be number two, coming off the back of a season where he was a regular and had been playing at his best, but it is totally just because he had a couple of bad mistakes and Ospina has gone in and done his stuff," Seaman told Press Association Sport.

"Either of them could be Arsenal's number one, it is about who is on form - and if Ospina keeps his form, then he is going to stay there."

Seaman continued: "It is not a difficult situation, but it keeps you on your toes to know that there is quality behind you.

"It is not just the games which make you play better, it is the training.

"The goalkeepers train together, and you see the other guy, you think 'I want to be better than him' or 'I am going to show him how good I am'

That is day to day and is good because it brings the best out of you and tests you, so you become a better goalkeeper."

Seaman, who is an ambassador for the 'Know the Score' campaign against bowel cancer, can understand Szczesny's frustrations, but believes the 6ft 5ins goalkeeper is in the perfect environment to develop his game.

"Wojciech has a big choice now, but he has still got loads of time, I did not join Arsenal until I was 26," said Seaman, who eventually left for Manchester City in 2003 after captaining Arsenal to FA Cup success over Southampton at the Millennium Stadium.

"It is about how he reacts, and what does the player want - does he want to play as a number one? Or is he happy being at a big club as a number two?

"It is all about his ambition

If he wants to be a number one somewhere, then how long is he going to have to wait?

"But if he leaves Arsenal, then it won't be the same level, because it is not until after they go, that all these guys realise how good Arsenal is."

The Gunners head into this weekend's Wembley showdown firm favourites to secure a return to the national stadium at the end of May and a crack at defending their FA Cup crown.

However, Seaman warned against underestimating the challenge of the Sky Bet Championship side.

"If Arsenal have any inclination of over-confidence, then just look at the FA Cup final last season - they could have been 3-0 down to Hull within 20 minutes," he said.

"Don't take it as if you are going to win it easily, because it is a one-off game and if Arsenal are not at the races, this Reading team could give them a good game.

"But if Arsenal are, then hopefully they can get to another cup final."

Seaman is supporting Know The Score in his role as an ambassador for the Bobby Moore Fund, one of the charities behind the campaign

The 51-year-old has seen family members suffer from bowel cancer.

He said: "The main thing is to be aware and don't be afraid of having checks, because if it is caught early, then it is curable."

:: The Know The Score campaign is raising awareness of bowel cancer through football between April 11 and 18

Bowel cancer is the second biggest cause of cancer death in the UK, and research has shown that early diagnosis is key to survival