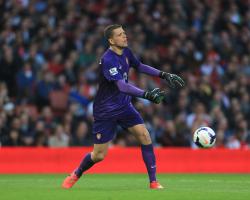 The Gunners signed off their final home Barclays Premier League match with a 1-0 win over West Brom on Sunday, having already been secure in fourth place following Everton's defeat by Manchester City on Saturday.

It was a positive end to a campaign which a couple of months ago had been on the verge of implosion, and will end at Wembley for the FA Cup final against Hull on May 17

Despite that, Szczesny feels things could have been so different, and so much better.

"It is good to sign off with a win in front of our fans, but with two games to go we had nothing to play for and I think we shouldn't really be in that position - we should be fighting for the title, so that is disappointing," said Szczesny.

"I never considered fourth place before the start of the season as a successful season and a good position - I play for Arsenal because I want to win the title every year.

"Obviously at some point, when you lose games and you lose the chance to fight for the title, then the new challenge is to secure the Champions League spot and that was the aim this season, but I wouldn't have taken it before the season."

After failing to keep pace with Liverpool, Manchester City and Chelsea - Arsenal suffered heavy away defeats against all of them - Arsene Wenger's side slowly turned their form around.

Four straight league wins following the nerve-shredding FA Cup semi-final penalty shoot-out win over Wigan saw the Gunners overhaul Everton and give themselves another shot at elite European football once again next season.

Szczesny feels confident Arsenal - who had to cope without key men like Theo Walcott, Aaron Ramsey, Jack Wilshere and Mesut Ozil for long spells because of injury - can regroup to last the distance in 2014-15.

"It didn't happen for us this year, but one thing we have learned is that that we are good enough to challenge next year, and hopefully add a little bit more strength as well with a couple of new players coming in," the goalkeeper said.

"If we manage to keep the consistency for the whole season, then we will be up there.

"We have had a good run and the momentum is with us so we stay positive and hopefully finish with a trophy at the end of the season."

Stand-in goalkeeper Lukasz Fabianski was the FA Cup hero for Arsenal against Wigan, saving two of the penalties.

Szczesny believes his compatriot - who is out of contract in the summer - has earned the chance to play at Wembley again.

"I think Lukasz has done so well, that he deserves to play, but having said that I am a professional and I would love to play in the FA Cup final," Szczesny added.

"It is the boss's decision to make, not an easy one, because there is a number one at the club and a goalkeeper who is the reason we are in the FA Cup final."

Another decision Wenger has yet to confirm is whether he will be staying on next season himself, although the Arsenal manager moved to allay any fears his lap of appreciation would be the last time Gunners fans saw him at the Emirates Stadium.

Szczesny said: "It would be huge for us.

"He is our manager and he has shown a lot of trust in a lot of the players at this club and we owe a lot to him."