​Mikel Arteta will be hoping to build on his promising start to life as Arsenal head coach when he takes his new side to Selhurst Park to play Crystal Palace in the Premier League's early kick off on Saturday.

Despite having never managed a professional game before his appointment last month, Arteta has overseen a dramatic turnaround in performances in a very short space of time.

However, his side now face a tough trip to highflying Crystal Palace, who the Gunners never managed to beat under Unai Emery.

With that in mind, 90min is here to dissect who the Spaniard should be starting for this London derby - as Arsenal begin to think about hunting down the Europa League qualification spots... Bernd Leno​ (GK) - Despite Emi Martinez' impressive performance in the FA Cup against ​Leeds, Bernd Leno will keep his place. The German has been considerably less busy since Arteta took over, and after facing three penalties in his last three games against the Eagles, he'll be hoping for a quieter afternoon at Selhurst Park.

Ainsley Maitland-Niles (RB) - After falling out of the first team picture under Unai Emery, Maitland-Niles has been one of the most visibly improved players under ​Arsenal's new manager. The England Under-21 international has benefitted from Pep Guardiola's influence on Arteta, and is thriving as an inverted full back.

Sokratis (CB) - When you look at Sokratis, you probably think he isn't cut out to play full-back - but he did so, admirably, against Leeds last week. Expect him to move back into the middle on Saturday, though, as the Gunners look to keep back-to-back Premier League clean sheets for the first time since April last year.

David Luiz (CB) - Another who has visibly improved under Arteta, ​David Luiz has overcome some shaky performances to look more assured in the backline. Must work on his consistency, as errors often creep into his game.

Sead Kolasinac (LB) - Despite limping off with injury against ​Manchester United, Kolasinac performed manfully against Leeds and should feature again. Bukayo Saka is another option, but if the Bosnian is fit, he'll get the nod - ahead of the youngster playing out of position. Lucas Torreira (CDM) - Another player who seems to have benefitted from Arteta's appointment is Lucas Torreira. He's by no means the finished article yet, but has looked sturdier in midfield after being restored to his more natural defensively-minded role.

Granit Xhaka (CM) - The last time Xhaka came up against ​Crystal Palace, his career in north London was almost ended. But things have turned around for the Swiss international, and it appears he will stay despite coming close to a Hertha BSC move. Back in favour under Arteta, he'll be hoping to shine brightly this time around.

Mesut Ozil (CAM) - Often accused of not trying, Mesut Ozil has his fare share of critics. But nobody can accuse him of not trying since Arteta arrived, with the German running further than anybody else during the recent win over Manchester United. Looks to have his appetite and enjoyment for the game back, which can only be a good thing. 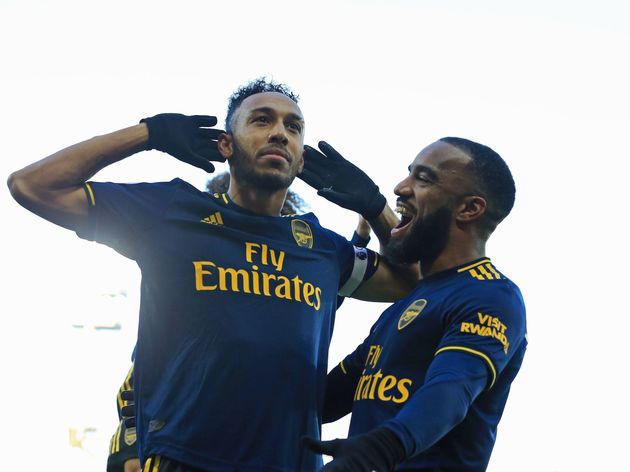 Nicolas Pepe (RW) - It's not been an easy transition to life in England for Pepe, but things are looking back for the Ivory Coast international after a solid showing against United. Will be keen to upstage fellow countryman Wilfried Zaha at Selhurst Park.

Alexandre Lacazette (CF) - ​Lacazette is in somewhat of a goal drought at the minute after failing to score in his past five appearances for the Gunners. The Frenchman looks short on confidence in front of goal, but his all round game is still impressing - evidenced by his man of the match showing against Leeds.

Pierre-Emerick Aubameyang (LW) - ​Aubameyang seemed to put to bed rumours about his future on Monday, by declaring his love for Arsenal and desire to help them succeed again. Fans will hope he uses these words to add to his 15-goal haul.