The Best Players Ever to Wear Each Shirt Number at Arsenal

Squad numbers continue to hold a special significance for all football clubs around the world. In quite literal terms they may be but a mere numerical system of classification, but it's much more than that.

As fans, we have grown accustomed to associate shirt numbers with players' positions, and visa-versa. It's a formula that works, and brings with it an inherent ability to compare your side's *insert number here* with the opposition's.

Speaking of which, and do correct me if I'm wrong, but Arsenal currently have the world's greatest No.77 on their books. If anyone can find a better player than Bukayo Saka, then do let us know. Good luck - you'll need it! And yet. Those numbers, those mere prints on the back of players' shirts have, over the years, grown to become emblematic of clubs' footballing identities. They are a vessel of the past by which former players continue to remind the world of the ​historic glories they achieved.

And, at ​Arsenal, shirt numbers do many things. First and foremost, they have the capacity to remind us of the good old days by providing us with numerical frames of reference for all the wonderful players to have represented the club over the years.

So, let's take a trip down memory lane, and pick out the greatest player to have worn each shirt number in Arsenal's ​history. It's going to be 1-11 with one slight exception. But you'll have to read on to read about that! Quick nod to Manuel Almunia, by the way. He provided a real selection headache when trying to decide on the greatest number one to have represented the club between the sticks.

Back to Seaman though. He played for Arsenal for a remarkable 13 years, and his arrival in 1990 contributed towards arguably the most successful era of the Gunners' history. He remains second in Arsenal's all-time ​Premier League appearances chart.

In his first season, he started each of Arsenal's 38 matches, conceding just 18 goals as the club regained the league title. From then on, Seaman garnered the deserved reputation as the greatest shot-stopper around. That continued throughout the decade - at the end of the 1998/99 campaign, he had conceded just 17 goals in 38 matches.

Seaman was also the penalty-saving supreme. Honestly, if you needed a spot-kick kept out, there was only one man to call. He literally saved them for fun. And, in his last season at Arsenal saw one of the greatest ever saves made by a goalkeeper. If you haven't seen it, go and watch it. Now. Granted, Dixon wasn't the most exciting of right-backs. But then again, you didn't have to be back then. Over a period of 619 appearances for the Gunners in a remarkable 14-year ​career in north London, Dixon deserves a dash of recognition, don't you think?

As reliable a right-back as they come, Dixon was first-choice for almost the entirety of his Arsenal career. He won four league championships, three FA Cups, and established himself as part of an impenetrable back-line that brought the Gunners success after success during the 1990s.

When he finally retired in 2002, aged 38, he had won league titles in three consecutive decades. Pretty impressive for a guy who, before Arsenal, had played for the likes of Burnley and Stoke. Another defensive stallion that spent over ten years at Highbury. Winterburn made 584 appearances throughout the course of his 13 year career at Arsenal. And, with No.3 on his back, he made the left-back position his own for pretty much the whole of that period.

The Englishman made a monumental individual contribution at the backend of the 1988/89 campaign. He scored one of the great Arsenal goals with a rasping 25-yard strike in the penultimate game of the season against Wimbledon, and then set up Alan Smith for the first goal in Arsenal's title-winning 2-0 away victory over ​Liverpool.

Now, some might say 'Cashley' Cole is more deserving than Winterburn. And, you could have a point. But, any player to have left the club in such a disrespectful fashion as Cole doesn't warrant inclusion. Here you are Ashley, you can have an honorary mention. Now, ​Cesc Fabregas can consider himself unfortunate to miss out - he did a stellar job replacing Vieira as Arsenal's number four. But, my oh my, the footballing world quite literally could not cope with the force that was Arsenal's captain.

Nine years at Highbury brought with it three Premier League titles, three FA Cups, and a certain 49-game unbeaten record - a period in which Vieira captained the side. He was the best central-midfielder of his generation, and the world will never see one quite like him.

Immense physicality was intertwined with a technical elegance a man of his stature should not have possessed. But, on the pitch, in the centre of midfield, Vieira had it all. Imagine spending 20 years at a football club. Well, that's what O'Leary did. He arrived at Highbury in 1973 as schoolboy, and left in 1993 having made 722 appearances of the club - a club record which is unlikely to ever be broken.

His first honour came in 1979, when he played in Arsenal's 3-2 victory over ​Manchester United in the FA Cup final. And, despite transitioning into more of a squad player, he still made 20 appearances in the Gunners' 1988/89 title-winning campaign.

These days, O'Leary is a regular attendee at the Emirates. To be fair, it's the least you'd expect from the club's official ambassador! ​Sorry David O'Leary. 20 years might be pretty impressive, but Tony Adams took it a step further. He spent the entirety of his professional footballing career at Arsenal - that was an extraordinary 22 years. He is, well and truly, Mr. Arsenal.

Adams was the captain of Arsenal sides across three consecutive decades who won four league titles. He is the only player in the history of English football to have achieved such a remarkable feat. No wonder the man had a statue unveiled outside the Emirates!

Just think about it for a second - Adams made his first-team debut at 17 years old before becoming club captain at 21. 674 games in total, and the arguably the club's greatest ever captain. Hats off, ladies and gentlemen, to Mr Tony Adams. To put it simply - Robert Pires was a footballing genius. He may not have been one of the longest-serving legends in the club's history, but the Gunners signed the Frenchman in his prime, and got to witness his talents first hand, and in their favour.

283 appearances across six seasons brought with them 85 goals, and 41 assists. He played a pivotal role in Arsenal's success at the turn of the millennium - he was named the club's, and the league's Player of the Season as Arsenal won the league title in 2002.

During the Invincibles season, Pires was unstoppable alongside Thierry Henry - he racked up 19 goals and 12 assists in all competitions, bettering his previous campaign of 17 strikes.

A true Arsenal legend who continues to bless us with his presence today - he's a London Colney regular, and has been for some time. Never leave Bobby! 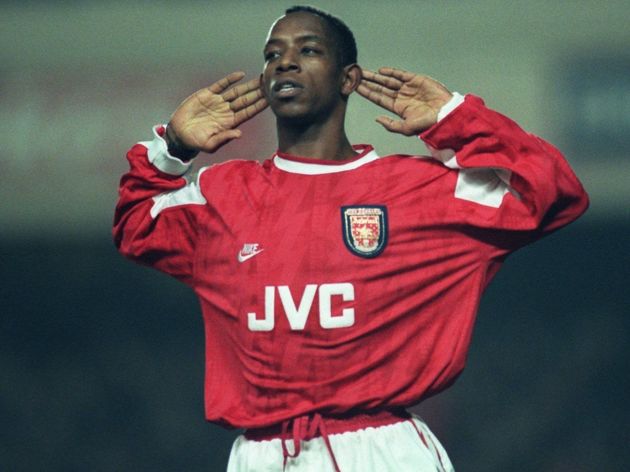 Wright arrived in 1991 for a then club-record fee - a whopping £2.5m, and started his Arsenal career as he meant to go on. Competitive debut? Scored on his debut. League debut? Helped himself to a hat-trick. Overall? 31 goals in all competitions.

After that, Arsenal's ​number eight went on to be the club's top scorer in six successive seasons, and became the club's all-time record goalscorer in 1997. By the time he left for ​West Ham, he had netted 185 times in just 288 appearances - a record bettered by only one man.

He loves Arsenal, the club loves him - it's just a lovely sight to behold really! Now, you'd perhaps expect the number nine position an easy one to pick. Surely, there's been a stand-out player to have had No.9 on their back. And yet, it's not as clear cut as some other numbers.

In any case, we're going to give it to Alan Smith. He was your stereotypical centre-forward, and he was all about the goals. He managed a total of 115 goals in 347 appearances, but it was his impact in trophy-winning campaigns that is perhaps the most impressive.

As well as scoring the first goal in the final day title-clincher at Liverpool in 1989, he was the league's top scorer that season. When the title returned to north London in 1993, he was again the league's leading marksman. He spearheaded both of the Gunners' title victories, and then some! Something for each and every Arsenal fan to be proud of? Not only did Dennis Bergkamp play for the club, but he spent the majority of his professional career with Highbury as his home.

Make no mistake, he had already cultivated his name as one of Europe's greatest by the time he arrived. He topped the Eredivisie scoring charts for three consecutive seasons with Ajax, and was voted Dutch Football of the Year in 1992 and 1993.

After an unsuccessful spell at ​Inter, Bergkamp arrived for a club-record fee of £7.5m. And, he set the Premier League alight during his 11 seasons in north London; he helped inspire a new Arsenal under Arsène Wenger to three Premier League titles and four FA Cup trophies.

Dennis Bergkamp for Arsenal in the Premier League (97-05):

In 1998 - the campaign during which he scored a stunning hat-trick away to ​Leicester - he was named PFA Players' Player of the Year after finishing as the club's top scorer. He recorded a similarly impressive strike rate in the campaign that followed.

And, whilst his numbers were consistently impressive both in terms of goals and assists, the magic Dutchman tended to produce a fair few mesmeric performances. Quick mention of that goal against ​Newcastle in 2002, which was voted as the best Premier League goal of all time. Overmars' Arsenal career was short, but very, very sweet indeed. He joined from Ajax, taking a similar path to fellow Dutchman Bergkamp. He had just won the Champions League in 1995, and three consecutive Dutch titles.

Granted, it took the world-class winger a while to find his feet on English soil, but as the season progressed into 'crunch-time' territory, Overmars made his mark. Arsenal won the title in 1998, and the Dutchman had a lot to do with it. He scored the winning goal in quasi title-decider against rivals Manchester United.

Then, when Arsenal actually won the league with a victory over ​Everton, Overmars netted twice. If he hadn't already done enough, he then opened the scoring in the FA Cup final against Newcastle too. It was Arsenal's League and Cup double, but Overmars' impact cannot be underestimated.

And again, sorry Robin, you were genuinely excellent, but the circumstances in which you departed left too sour a taste in Arsenal fans' mouths. This was only supposed to be squad numbers one to eleven, but if we have to push the boat out for Thierry Henry requires, then SO be it.

We all know he's the Premier League's greatest ever striker, and his ownership of the No.14 shirt became emblematic of his extraordinary goalscoring abilities.

It is truly quite remarkable what he did for the club. Eight seasons totalled 226 goals, making him the club's all-time top scorer. Starting from 2001/02, Henry scored 30 or more goals across all competitions in FIVE consecutive seasons.

BREAKING: Thierry Henry has been tested positive for being best Premier League striker of all time. pic.twitter.com/Uw4zSxbXMq

And now for some notable records - Henry is the only player to have both scored and assisted 20+ goals in a Premier League season. He holds the record for consecutive seasons scoring 20+ league goals (5), Golden Boot wins (4), and the most league goals scored by a non-English player.