The season so far in stats 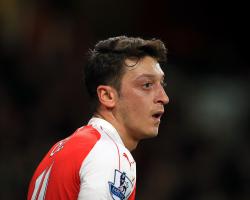 The Argentine has still registered 10 goals this season; 5 of which came against Newcastle at Etihad despite only making 15 appearances for the Citizens

On the other hand, England and Leicester striker Vardy made history this season by breaking Ruud van NistelrooyÃâs record of scoring in consecutive games on his way to become joint top goal scorer

ArsenalÃâs German playmaker, Mesut Ozil, has been one of the pivotal reasons that the Gunners are currently perched at the top of the Premier League

After heavy criticism last season, Ozil is back to his best and has registered 16 Premier League assists; meaning he is on course to break Thierry HenryÃâs record

The 27 year old has averaged a chance every 20 minutes this season which could lead Arsenal to their first title since 2004.

After being dropped early in Manuel PellegriniÃâs reign, Hart has provided City with some fantastic displays and has come to their questionable defenceÃâs rescue many a time

He has The Season In Stats So Faraveraged 2 saves a game and has been awarded SquakwaÃâs Keeper of the Week on five occasions as well as boasting a 97% claim success from deliveries into his area.

For players who have played over 20 games this season, Swansea midfield tops the stats table for passing accuracy

The South Korean has completed 91% of his 850 passes this season; of which 64% were played forward

Despite his high passing completion, Ki has only registered one assist and created 16 chances this season

However, Stoke have been one of the stand out teams this season under Mark Hughes as the Welshman looks to complete their transformation from a long ball team

Pieters has been a vital part of that transformation, winning 65 tackles this season; the most in the league thus far

The 27 year old has made 66 interceptions, 70 clearances and 11 blocks this season as well as creating 13 chances from the left back positions

Pieters has a 77% pass accuracy this season

WHOSCORED TEAM OF THE SEASON SO FARÃâ¦