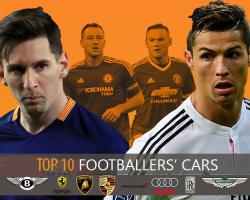 Here we take a look at some of the best.

The Ferrari 458 was first unveiled in 2009 and became a firm favourite with many football stars with its replacement the 488, unveiled in 2015 likely to become another winner

Their cars are undeniably beautiful, classy and attract people who want to make a statement that is more suave and understated, more, well, James Bond.

The 612 was superseded by the FF 'Ferrari Four'.

This incredibly sleek and beautiful machine is faster than the 458, Enzo, 430 Scuderia and 599 GTB with only LaFerrari faster on the Fiorano test circuit accrding to Ferrari reports

With a top speed of 211mph and 730 bhp this beast is not for the faint-hearted.

Compared to many of the vehicles on this list, this machine is somewhat understated as it has a greater emphasis on combining comfort with speed but it is still at its heart a super sports car

The car therefore has the looks and feel of a GT4 but with supercar tuning.

The prototype was a 6-time 24 Hours of Le Mans winner.

The 2-door roadster was jointly developed and sold by Mercedes-Benz and McLaren automotive between 2003 and 2010, taking as inspiration the Mercedes-Benz 300 SLR

The powerplant and subsequent numbers of this vehicle are staggering with 617 hp which delivered a top speed of 208mph and 0-100km of 3.1 seconds

The combined output of its engine and electric motors is 887 hp which will take the car to 210mph and 0-100kph in just 2.5 seconds.

The 3.3L V12 produces between 280-300 hp but its the looks of this coupe that make it so incredibly desirable with one 275 being recently sold for $3.96 million in auction

Unlike Porsche, Ferrari have opted for a V12 over a V8 which produces a combined output of 950 hp

Agree with this list? Why not give a supercar a try on a driving experience and let us know what you think? You can even get a 10% discount on us if you book b the 24th december 2015 using FOOTY15!