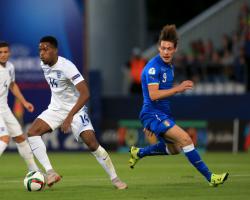 The Serie A club's director of sport Gianluca Petrachi said on Sunday that a bid had been received, but Press Association Sport understands Arsenal deny making such an offer

Petrachi told Sky Sport Italia that Torino had rejected a 65million euro (ÃÂ£55.7million) bid from the Gunners for the Italy international

Such a fee, if the offer had been accepted, would have seen him become Arsenal's record signing

Petrachi was asked about a bid from Arsenal, and told Sky Sport Italia: "Yes, we received that offer but it does not match Belotti's value

"And for the time being he's not going anywhere: we want to enjoy having him around, then we'll see."

Following Torino's goalless draw at Sassuolo on Sunday, Torino president Urbano Cairo stressed the importance of respecting the clause he worked hard to insert into Belotti's contract in December.

"We put a very high price on that clause to deter other clubs, and I want to keep Belotti close by," he told Sky Sport Italia.

"I've proved throughout my life that I'm more of a buyer than a seller, in fact I've never sold anything."