Arsenal manager Unai Emery has revealed he would rather win trophies with his side than set individual records following their 3-2 loss to Crystal Palace on Sunday.

Much was made of Emery winning 32 of his first 50 games following the 1-0 success at Napoli. But, while the Gunners are well placed in the Europa League, their top four hopes are still up in the air after the shock home defeat.

When Emery was asked about his record-breaking season, he responded as quoted by ​Sky Sports: “It’s great for us as a team and great for me as a coach, but I want to win all of the matches I play. 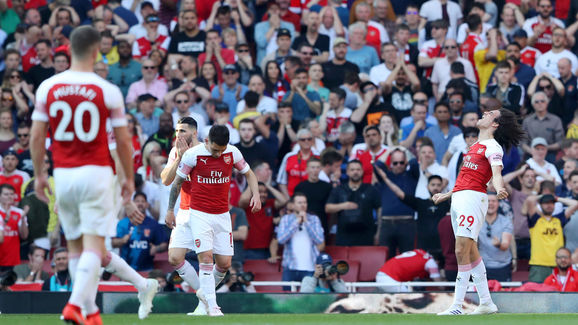 The Gunners were beaten 3-2 by their London rivals at the Emirates Stadium - a result which could have an impact on their quest for Champions League football next season - but Emery has defended his players with Arsenal in a good position to finish the campaign strongly.

“We want to play next season in the Champions League, but we know it is going to be difficult. We need our focus to be 100 per cent, we need everybody concentrated.”

Sunday's missed opportunity to climb above Tottenham into third place will leave a sour taste in the mouths of Arsenal fans, as Chelsea could now move three points ahead with a win over Burnley on Monday night, which would see the Gunners fall to fifth.

Arsenal will have to respond to the Palace defeat immediately with three points on Wednesday when they travel to Wolves - a team who seem to save their best performances for the big six in the Premier League.

As for Emery's silverware ambitions, he knows the Europa League better than anyone after winning three consecutive trophies with Sevilla, and a fourth for Emery would certainly make his debut season a successful one.