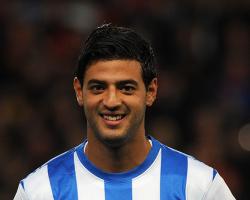 The 25-year-old Mexico international initially joined Sociedad on loan from Arsenal in 2011 before making the switch permanent in 2012, with the Gunners retaining the option to buy the player back

Arsenal have now decided against bringing Vela back to London and have agreed a deal with the Spanish club understood to be worth up to 15million euros (Â£12million) for Vela to become Sociedad's player exclusively.

A statement on www.realsociedad.com read: "Real Sociedad have reached an agreement with Arsenal for Carlos Vela to continue at the txuri urdin club.

The previous agreement finished in 2016

The Mexican striker has already signed his new contract."

Vela has scored 47 goals in 126 matches for Sociedad, helping them finish fourth in La Liga in 2013 and seventh last term.

Vela said: "I've also said that this is my home, I'm very well in San Sebastian, which is what I told the president when he asked my about my intentions.

"We knew it wouldn't be easy, but fortunately things have turned out well and all parties are happy.

"This club, this team, have the ambition to carry on improving and I'm convinced we're going to have an exciting year

Now I'm going to enjoy the last few days of holiday with my family and then be able to prepare for the season in the best fashion."