Vermaelen focused only on final 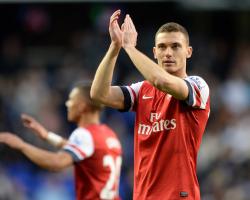 The 28-year-old Belgium defender made 14 Barclays Premier League appearances as the Gunners secured a top-four finish and another season of Champions League football.

Vermaelen, who played in the penalty shoot-out victory over Wigan in the semi-final, will be hoping to be involved against Hull this weekend despite requiring five stitches in a knee injury suffered at Norwich on the final day of the league campaign.

If he does play, it could prove to be his last appearance for Arsenal as he strives to find first-team football with just one year left on his contract.

But Vermaelen is keen to keep his mind trained only on delivering the FA Cup to the Emirates Stadium and end a nine-year run without silverware for Arsene Wenger's side.

"It is not important at the moment, my future," he said.

My future is not important at the moment.

"We know there has been a lot of talk about not winning a trophy for a long time and so for us it would be important to win the final."

Memories of a 1-0 League Cup final defeat to Birmingham in 2011 will no doubt weigh heavily on the minds of Arsenal supporters leading into another showepiece game where they enter as the firm favourites.

Vermaelen missed the shock loss two years ago due to a long-standing Achilles issue and does not want to be recollecting that time in the run-in to the meeting with Hull.

"The whole time was difficult for me, to be out injured for such a long time," he said.

I was at Wembley, I was in the stands

It's a long time ago but it was a very disappointing result and everybody knows that.

"We can't think about it

Saturday is a different game again

There are a lot of changes in the team since then - a lot of players left since then - but we have to make sure it doesn't happen again.

"Every final is something special, something different

Of course, that happened but that's the past and we have to make sure that doesn't happen again."

Although Vermaelen is looking to avoid a repeat of the Birmingham defeat, when Obafemi Martins capitalised on a defensive error to score a late winner, he knows Arsenal's players will be competing under immense pressure to finally deliver another trophy.

"There will always be pressure for a cup final," he added.

"The players are used to playing under pressure because if you play for a club like Arsenal, you have to win every single game

People expect that so Saturday won't be different

The pressure will be there always to win that game.

"We are used to the pressure, every game has to be won

Of course we know that there has been a lot of talk of not winning for nine years but it is a game we have to win.

"We know there is a lot at stake as well but we go in with a lot of confidence."