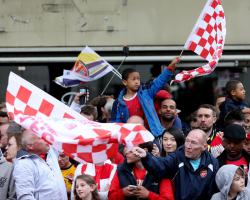 The England forward joined the rest of the squad for Sunday's open-top bus parade around the streets of Highbury and Islington following the 4-0 victory over Aston Villa.

Walcott, who scored Arsenal's first goal just before half-time, will head off on international duty next week, with talks over a contract extension with his representatives set to resume later in the summer.

Walcott said: "I am sure things will get resolved

I just want to enjoy today.

"I have got England coming up and then we can think about that process, but it will take time, I am sure."

Thousands of Arsenal fans braved the rain to cheer the squad from the Emirates Stadium to a civic reception at Islington Town Hall, celebrating the club's record 12th FA Cup victory after successfully retaining the trophy.

Speaking to Sky Sports News HQ from the Arsenal team bus, Walcott added: "We just showed it has been a great success this year, it has been a step up, to finish third (in the Premier League) and win the FA Cup in consecutive years

We want more and more of this.

"These players have the trust in each other and this has got to be a stepping stone now to challenge for the title, because this is what all of these fans dream of.

"We need to do it for them, they have waited a long time."

Villa laboured to find a way back into the final after Walcott's goal, before a fine 25-yard effort from Alexis Sanchez doubled Arsenal's lead.

Per Mertesacker headed in a third, with substitute Olivier Giroud wrapping up scoring from close range in stoppage time after coming off the bench to replace Walcott, as the Gunners recorded the biggest FA Cup final winning margin in more than 20 years.

German defender Mertesacker, who has captained the side recently following injury to Mikel Arteta, believes Arsenal can build further success.

He said on Sky Sports News HQ: "This is an amazing achievement for us as a group, which will hopefully build confidence and hopefully we can build on that next season."

Arteta was not part of the match-day squad at Wembley because of injury, but joined Mertesacker in leading the squad up to the Royal Box to lift the trophy.

The Spaniard, who is set to extend his contract for next season, also believes Arsenal can go on to greater things.

Arteta said: "It took some time to get going, but now we have created some momentum and hopefully there is more to come.

"We don't have any limits

We need to set bigger aims and we have the quality, everything needed to go bigger and bigger, hopefully we can do that in the next few seasons."

Giroud scored his 19th goal of the campaign at Wembley, despite having missed three months with a broken leg.

Giroud said: "Now we can enjoy this trophy, but next year we want more.

Having now added a second successive FA Cup, Ramsey knows the question of whether Arsene Wenger's men can perform consistently in the Premier League will determine what more the group can achieve.

"This winning habit is very important to keep that momentum going

The fans have given us fantastic support throughout the season and hopefully we can go on now next year to challenge for the Premier League and to win more things for them," Ramsey said.

"Hopefully we can all stay fit for a full season, that will be my main target anyway, and we can keep everyone healthy

We are capable on going on these great runs, like we did at the back end of this season.

"Hopefully we can maintain that throughout the season next year to really believe and go on to more success."

Manager Wenger is expected to strengthen the Arsenal squad over the summer, with reports suggesting Chelsea goalkeeper Petr Cech as a potential target.

Arsenal chief executive Ivan Gazidis believes everything is in place for the club to again challenge for the game's top honours on a consistent basis.

Gazidis told Arsenal Media: "We have had players along the way whose character has been questioned..

but this team has enormous character and I think great potential looking forwards.

"There is a tremendous feeling this is the beginning of something, a platform and we are very excited about what we can do with this team."