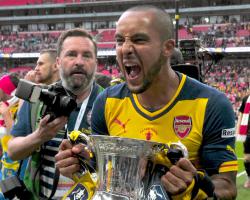 The England forward, who had plundered a hat-trick in the final league match against West Brom last weekend, gave Arsenal the lead just before half-time with a fierce close-range finish.

Any hopes of a comeback from Vila, as they had done to defeat Liverpool in their semi-final, were effectively ended by a 25-yard wonderstrike from Alexis Sanchez early in the second half.

Per Mertesacker and Olivier Giroud completed what was in the end a comfortable victory, and the biggest FA Cup final winning margin in more than 20 years, as the Gunners retained the trophy.

Walcott, though, accepts the biggest challenge lies ahead for Arsenal as they aim to bridge the gap to Premier League champions Chelsea, having finished third.

" This team is blessed, and we have a fantastic squad, I have been at Arsenal for a long time and this is truly the best squad I have worked with, and I believe we could go and challenge next year," said Walcott.

"That is the ultimate goal, the FA Cup is fantastic and to win it in consecutive years, not many teams have done that, so it just shows how good this team actually is and the manager has had so much belief in us since day one."

Walcott has yet to commit his long-term future to Arsenal, but talks over a contract extension are set to resume in the summer

The 26-year-old has gone through a tough run of fitness problems, having been out for more than a year with a seriuos knee injury which shattered his 2014 World Cup dream

"I have worked really hard and the manager has shown his faith in me, so I just wanted to repay him and the fans for their support," he said

"I missed (the final) last season through injury and personal reasons, so it was nice to come back with a bounce in a winning team."

Arsenal are set for an open-top bus parade around the streets of Highbury and Islington on Sunday, and Walcott will then report with the England squad ahead ahead of the June 7 international against the Republic of Ireland in Dublin and Euro 2016 qualifier away to Slovenia.

Walcott said: " England is always important, representing your country is a massive honour, so we will have some good times tonight and then when it comes to meeting up with England, I will be completely focused ahead of the friendly and then the qualifier."

Villa were never really able to get a foothold in the match and failed to test the Arsenal defence, but for a couple of half-chances

Defender Alan Hutton said: " We tried to keep them at bay for as long as possible, and had spoken about keeping them out for 60 minutes or so, but Arsenal are a world-class team and we just did not get there in the end

"When you are playing the top teams, you need a bit of luck on your side and there were some decisions which could have gone our way, but it was just one of those things."