Walcott will be big miss - Parlour 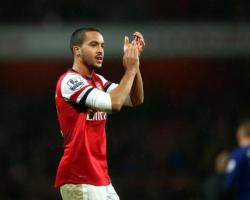 The 24-year-old was carried off during the Gunners' 2-0 FA Cup win over Tottenham on Saturday and it has since been revealed that he will miss six months due to an anterior cruciate ligament injury to his left knee.

Walcott went to the 2006 World Cup but failed to make an appearance and was omitted from the 2010 squad for South Africa.

The forward will now be forced to miss a third finals and Parlour, who himself never took part in a major international tournament, feels it will be a massive blow to both player and country.

"What a really big injury this is for Arsenal and England because I'm sure Theo would have been a starter for England in Brazil," he told Sky Sports News.

"And it must be a massive blow for himself because he's playing in a very good team at the moment, top of the league, and looking forward to Brazil.

"He must be absolutely distraught about the extent of the injury."

Parlour added: "He'll be absolutely distraught losing the rest of the season and obviously missing the World Cup which is the best tournament to ever play in."

The news will be desperately disappointing for Gunners boss Arsene Wenger, who may be forced to bolster his options in the January transfer window as a result of his striker shortage.

Walcott was given a rare outing up front against Spurs, with Olivier Giroud ruled out due to illness and Nicklas Bendtner expected to miss all of January with his ankle problem picked up when scoring a late goal in the 2-0 win over Cardiff on New Year's Day.

"He's a very important player for Arsenal this season and Arsene Wenger will be looking at it," added Parlour.

"That's another striker. After losing Bendtner, Giroud is injured, Walcott - who can play up front - he's injured now.

"I'm sure Arsene Wenger now says to the board or whoever is involved in the transfer policy: 'we definitely need at least one or maybe two strikers to come into the club'."

"Gutted for Theo, he'll come back stronger after this. Been fantastic for us so far this season. Have a speedy recovery mate," the Welshman wrote on Twitter.