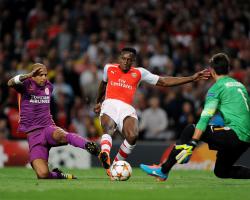 The England forward netted his first career hat-trick in the 4-1 demolition of Galatasaray in the Champions League on Wednesday night.

Welbeck's clinical finishes, one when racing on to a short back header to slot past the goalkeeper, has led to suggestions the 23-year-old has all the traits needed to follow in the footsteps of Henry, whom Gunners boss Arsene Wenger converted from a winger to become the club's record goalscorer.

Team-mate Aaron Ramsey, currently out with a hamstring injury, declared Welbeck "has everything to make himself an Arsenal legend", reflecting on talkSPORT on his "very Thierry Henry-esque goal".

Welbeck, however, is determined to keep things in perspective.

Obviously Thierry Henry is someone I have looked up to ever since I started playing football," said Welbeck, who was often deployed out wide for United and also sometimes with England.

"Nobody can really criticise my finishing because they don't really see me playing in a forward position too often, but now I am getting into these positions I want to be sticking the ball in the back of the net

I am sure it's the same with every other striker.

"Obviously people can say I have not scored enough goals, but you stick the best strikers on the wing in a four-man midfield and see if they score goals.

"If you are getting goals and getting a run of games in your preferred position, your confidence is going to grow and performances are going to grow as well.

"That is something I am really looking forward to doing, building on those performances."

Welbeck believes feeding off the likes of Alexis Sanchez, who scored Arsenal's third goal on Wednesday, and German playmaker Mesut Ozil can only help his development.

"When I am playing with these sorts of players, they are looking to slip the ball in behind

I am always ready for that, looking to make the movement right and get in behind the defenders," he added.

It is good to play with this calibre of midfielders, they are only going to create chances."

Arsenal head to Barclays Premier League leaders Chelsea on Sunday out to improve on their 6-0 trashing at Stamford Bridge in March last season.

Welbeck said: "We are a confident group and going into Sunday's game we are going to have to prepare physically, mentally and tactically well.

"We have got a good camaraderie in and around the group.

"We are all really looking forward to it and are really confident."