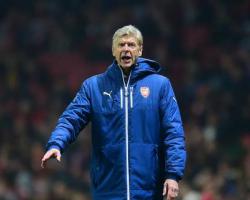 The Gunners will be out to get their Barclays Premier League campaign back on track against Newcastle in Saturday's late kick-off at the Emirates Stadium, having produced an impressive display when beating Galatasaray 4-1 in their midweek Champions League tie in Istanbul.

It was not so long ago the Newcastle fans all appeared united in their desire to see manager Alan Pardew sacked as the club looked set to ensure a drawn-out relegation battle.

However, following an upturn in fortunes which saw the Magpies knock Manchester City out of the Capital One Cup and last weekend end Chelsea's unbeaten start to the season, Pardew is now very much flavour of the month - his side are level on points with Arsenal in seventh place.

Gunners boss Wenger, who continues to see his own position questioned by some Arsenal supporters, accepts such highs and lows come with the territory.

You want to win the next game

It is a permanent tribunal from everybody, and it is as it is

You have to cope with that," said Wenger, who last season presided over his 1,000th match in charge at Arsenal.

"I have sympathy for every manager who suffers."

The 65-year-old French coach came in for harsh personal criticism following the 3-2 defeat at Stoke last Saturday, when he was jeered by a small group of Arsenal fans as the players boarded their train back to London.

Pardew slammed that treatment as "totally disrespectful", and claimed Arsenal should name their stadium after Wenger in recognition of his achievements.

Wenger, who had a touchline row with Pardew when he was West Ham manager in 2006, responded: "I am very thankful for compliments, but I don't want anything

I don't deserve that one thing.

"The one thing is to do well in my job for this club, which is what I always try to do."

Wenger has been impressed with Newcastle's response after a testing start.

Fortunately he has been rewarded for it," Wenger said.

"They had a great result last week, they are doing well and they are on a good run

It will be a very interesting challenge for us.

"We have a good dynamic in our team, we won four of our last five games

We had one blip against Stoke, but overall I think we are on a good trend."

Arsenal have some defensive problems because of injuries and a one-match suspension for Calum Chambers, so right-back Mathieu Debuchy could be asked to move over to centre-half, the France international having just returned from three months out with an ankle problem.

Despite the loss of midfielder Aaron Ramsey to a hamstring injury, Arsenal still have plenty of attacking options - German forward Lukas Podolski netted a brace in Istanbul

Cisse scored both goals as his side became the first to sink Jose Mourinho's Chelsea at St James' Park last weekend and extended their remarkable recovery to just one defeat in their last 10 league games.

Cisse's revival in many ways reflects his side's recent surge after he started the season troubled by a knee injury which left him without a goal until his brace saved a point against Hull at the end of September.

"Papiss is one of those priceless players

At the moment he is red-hot and if we give him the chances I feel pretty confident he will take them,`` said Newcastle boss Pardew.

Sometimes you might not be dominating a game and then someone like Papiss comes along and gives you a lift."

But Pardew admitted he remains cautious over Cisse's recent goalscoring streak as he continues to manage the injury he sustained towards the end of last season.

"We have had to manage his knee and it is an ongoing process," added Pardew.

But by the time we get to the summer it will all be over."

Pardew would dearly love to continue his revival by taking the scalp of Arsene Wenger's men but he is hampered by the absence of both Moussa Sissoko and Steven Taylor due to suspension.

Rolando Aarons is also ruled out for a month with a hamstring injury while 21-year-old goalkeeper Jak Alnwick will be given his chance to shine after replacing the injured Rob Elliot at half-time against Chelsea.

And Pardew has urged Alnwick, whose existing contract runs out at the end of the season, to seize his chance.

He said: "It is a great opportunity for Jak and he is very keen to take it.

"He has had a great start and fitted in very well

I have great faith in him but he will need a lot of luck as well.

That is definitely in Jak's court."