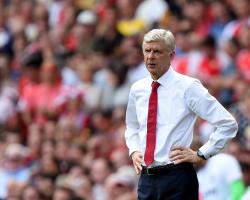 The Gunners head to Crystal Palace on Sunday aiming to pick themselves up from the bitter disappointment of losing 2-0 at home on the opening weekend of the Barclays Premier League.

Going into the new campaign, Wenger's squad - bolstered by the summer signing of veteran Petr Cech and having beaten Chelsea in the FA Community Shield at Wembley - were seen as genuine title contenders.

The Arsenal manager is confident that belief in the squad remains intact and it is how his players recover from such disappointments which will be the yardstick for success come May 2016.

"Every defeat makes you a bit smaller, but it is our job to take it in perspective with 37 games to go," said Wenger.

"We have the history behind us from the second half of the campaign last year which shows we have the quality to always respond and to be consistent, so let's focus on our quality

"Defeat is part of the season and of course that was not planned, but we know it is how we respond to these kind of things that will make our season."

Following Sunday's loss, Wenger once again was left facing questions over the direction of his side, both under the media spotlight and from Arsenal's own supporters.

"We have a big following and disappointed people are emotional, that is understandable and it hurts us as well to disappoint people who have a high level of expectation," he said on Friday.

It is a defeat and it hurts, but that shouldn't take our belief in our potential away.

We will prepare for that."

Wenger said there had been nothing "concrete from anybody" amid reports of interest from Palermo in forward Joel Campbell and also played down suggestions there were talks with full-back Nacho Monreal over a contract extension.

Arsenal have been linked with big-money moves for both defensive midfielder Grzegorz Krychowiak at Sevilla and Real Madrid forward Karim Benzema.

While keen to bring in new talent ahead of the transfer window closing on September 1, Wenger stressed completing any potential deal was not always simple.

"If we find somebody anywhere who strengthens our squad then we will do it, but it is not supermarket stuff where you go in and say, 'I would like this, please can you give it to me'

The availability is not easy," he said.