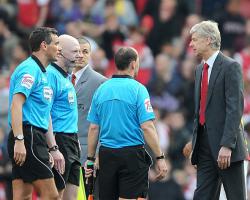 The League Managers' Association, backed by a number of Premier League bosses, has launched a fierce attack on Bernstein's comments.

The LMA said Bernstein's comments were a "misguided and unhelpful...megaphone commentary from the sidelines" and that he failed to engage with the organisation during his time in office.

But Arsenal boss Wenger was a lone voice backing Bernstain, saying: "I go along with that [Bernstein's comments] and I have some work to do on that front as well."

Bernstein had spoken out after being awarded the CBE in the New Year Honours, saying managers were harassing officials and were being too critical of referees after matches.

The LMA said in a statement: "We believe the comments are misguided, and unhelpful. It is important to recognise that managers in professional football contribute significantly to the success of the game both on and off the field.

"Having spent their lives dedicated to the game, they value it, are committed to seeing it continue to grow and to contribute to its future direction.

"It is particularly sad therefore, to find David Bernstein celebrating his CBE by engaging in a megaphone commentary from the sidelines, taking a unilateral swipe at managers, having wholly failed to engage, in any meaningful way, with the LMA and its members during his tenure as FA chairman."

In an interview with Press Association Sport on Monday, Bernstein had said managers need to take more responsibility for their behaviour and were setting "a terrible example for their players, let alone the general public".

Manchester United boss David Moyes attracted attention only this week for criticism of Howard Webb after his side's loss to Tottenham.

He thinks, though, that he and his counterparts are not culpable.

"I think managers are incredibly responsible," he said.

"The work the LMA do and what managers give back, the help they're trying to give the FA Commission, for example, I think that would be a wrong thing to say about the managers."

Stoke boss Mark Hughes, who was fined Â£8,000 this week for improper conduct, said he backed "every word" of the LMA's stance.

He said: "There's huge sways back and forth in terms of emotion and how the ebb and flow of the game affects you in terms of the desire you have to see fair play and make sure you're competing.

"Human nature is a thing that, on occasions, your emotions can get the better of you, and football managers aren't immune to that."