Wenger backs Theo to bounce back 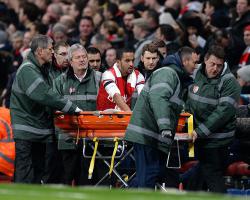 The 24-year-old is set to be sidelined for six months after suffering anterior cruciate ligament damage when making a defensive tackle in the FA Cup third-round win over Tottenham on Saturday.

Walcott's loss is a major blow for both club and country, with the pacy forward set to have been a key part of England manager Roy Hodgson's plans in Brazil this summer.

Wenger, though, is confident Walcott's "balanced" personality can help him recover fully from such a devastating setback.

"Theo is handling it as well as you can when you have had such a shock because he is mentally strong, is very balanced as a person and he can put it into perspective," Wenger said on Arsenal Player.

"We know that he will have the dedication and the serious attitude to come back as strong as ever."

Wenger added: "He has surgery and then it's rehab. You know that it is six months and that you hope it all goes well. The only thing I can say is it's very sad news for us and above all for him."

Despite Wenger's positive rhetoric for the future, the Gunners boss concedes the serious injury to Walcott removes a potent weapon in his team's attack, with the former Southampton man having netted five goals since his return from a stomach injury.

"We lost a very talented player, a very intelligent player and a player who was just grabbing his form again," the Arsenal manager continued.

"From game to game he became more influential, you have seen a complete player.

"He can always decide a game through a final ball or through a goal. Sometimes in the same game he does both.

"I felt against Tottenham he had a very convincing performance because he integrates well our style of play as he has been here for so many years now.

"When we combine at a high pace he is involved in it because he understands exactly what we want to do."

Arsenal will now have to plan for the rest of the campaign without the electric pace of Walcott, but the imminent return of Alex Oxlade-Chamberlain from his own five-month lay-off with a knee injury and the emergence of German starlet Serge Gnabry - said to have sparked interest from Borussia Dortmund - does provide Wenger with options.

Wenger said: "It has been five months where he has been completely out, so that means he is fresh and that should give us a boost."

Arsenal are understood to be looking to bring in back-up for lead striker Olivier Giroud during the transfer window, although Wenger concedes pushing through a big-money transfer such as Atletico Madrid's Diego Costa - at this time of the season - is historically difficult.

"[Walcott's injury] has accelerated speculation first and of course my desire as well - but let's not forget about Serge Gnabry who can play in the first team," the Arsenal manager added.

"We have Oxlade-Chamberlain back and we have many other players who can play on the flanks so to find better solutions than what we have internally will not be easy.

"Up front we lose Theo as a potential central forward and that's maybe where we have to look outside, but we hopefully have (Nicklas) Bendtner back in three weeks.

"We are there for the opportunities, but it is very difficult at the moment."

Wenger revealed midfielder Aaron Ramsey and defender Kieran Gibbs were "very close" to making comebacks, although captain Thomas Vermaelen is doubtful because of a knee injury sustained in the FA Cup tie against Spurs.

Arsenal could be usurped at the top of the table by title rivals Chelsea and then Manchester City before they kick off at Aston Villa on Monday night.

Midfielder Tomas Rosicky, however, maintains the Gunners have the maturity to last the distance through to May.

"This team has more experience than it did in the past. We have [Per] Mertesacker - and[Mesut] Ozil, who won things in Madrid - and the other experienced boys like Mikel [Arteta] and [Mathieu] Flamini," the Czech playmaker said.

"Plus the English boys are not kids anymore, they gained experience through the years of playing here, so that is why I think we have the maturity to do it this year."