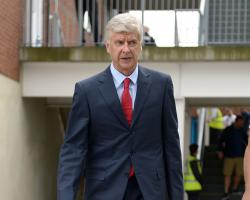 The Gunners continue to be linked with Real Madrid forward Karim Benzema, but so far neither club has gone public about any interest

In contrast, Arsenal's Premier League title rivals Chelsea and Manchester City this week both spent big sums to bring in Pedro and Nicolas Otamendi from Barcelona and Valencia respectively

Wenger has yet to strengthen the Arsenal outfield , but did move for veteran goalkeeper Petr Cech earlier in the summer

"I expect (signings) like you, but at the moment we are not close," Wenger said at a press conference ahead of Monday night's match with Liverpool.

"I listen to everybody, but my job is to make decisions.

"We want to develop players as well rather than overthinking whether to buy.

"I am not against buying when it is a plus for your team, (but) if it is just to buy a player at the level of the players that you have to make people happy, I am not ready for that.

"If it is somebody who brings something that you don't already have in the squad, then of course you want to do that."

Wenger feels there is also too much of a clamour to look beyond the existing squad for solutions to any perceived shortcomings.

The cohesion, the style of play that everybody knows are important qualities," he said.

"We live in a society that is hungry for news and news is good, I can understand that, but you have to absolutely be convinced that (any new signing) strengthens your team."

Wenger also believes there is a lack of the right calibre of player available for transfer in the current market.

"The funds are there more than the players who could strengthen the squad, that is a big problem," said the Arsenal boss.

"People know that you have the resources and they want you to buy players from clubs who do not need your resources, and who are not necessarily prepared to sell."

Wenger hopes Costa Rica forward Joel Campbell would remain at the club rather than look for another loan move.

The Gunners boss also would prefer if all transfer business stopped when the season kicks off.

"I stand on the fact that when the championship starts, the transfer window should be finished because it is too easy to say 'we will play three or four games and see what we miss', then after we correct it quickly with a lot of money," he said.

"It is too big an advantage for clubs who did not work well during the transfer window."

However, Wenger does not expect midfielder Jack Wilshere to be available following a hairline fracture in his fibula until after England's upcoming internationals.

"It is too early to think he would be playing for England, but after the international break he has a chance," the Gunners boss confirmed.