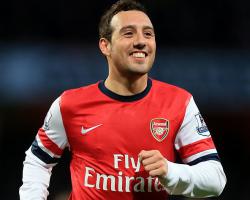 With free-scoring Manchester City romping to another big home win as Cardiff were the latest side put to the sword, there was little margin for error from Wenger's men, who hold a slender one-point lead.

After a slow first half, the Gunners finally sparked into life as two quick goals from Cazorla, each dispatched with an instinctive finish - secured what was in the end a comfortable victory.

"When you play in your opponents' half, in the final third, he is one of the players who can create something special, either through his pass or through his finishing," said Wenger.

"He is two-footed, and that makes him very dangerous."

Wenger added: "Cazorla was out for a long time at the start of the season and had some injury problems.

"After that he had an ankle problem and only recently, since mid-December, has he come back to his level."

Wenger felt his side deserved credit for showing patience to finally breaking down what was a determined defensive display from the Cottagers, who are fighting for their top-flight survival.

He said: "We were in control for the 90 minutes, but we were a bit one-paced in the first half with our passing. In the second half, when we got up a gear we scored the goals.

"We had a few more chances, but overall in games against teams who fight not to go down, they are of course very difficult. Sometimes it is a question of patience."

Arsenal are on the look out for some offensive cover following the season-ending knee injury to England forward Theo Walcott.

Wenger, though, played down suggestions a deal for Juventus' striker Mirko Vucinic was imminent, with reports representatives from the club had held meetings with the player's agent.

"We are looking at potential possibilities for us to get someone in, but we are not especially in for Vucinic," Wenger said.

"Some people have visual capacities that I don't have."

The Arsenal manager continued: "We are not on any special case.

"I would love to announce something that would excite you and me, but I don't have the possibility to do it."

With or without any new additions, Wenger feels Arsenal are well set for what looks to be the most exciting championship run in of recent years.

"We have played 22 games and have 51 points. If you compare that to any other season you will see that it is one of the best, if not the best ever, so let's just continue," the Frenchman said.

"We have a good solidarity in the group and we rotate a bit and sometimes great players are on the bench.

"You want me to buy more players, but if they sit on the bench you ask me why."

Fulham - who made the expected sweeping changes from their midweek FA Cup third-round replay win over Norwich - had never won in any competition at Arsenal, and have now lost 23 of their visits to north London.

Rene Meulensteen's men remain in deep trouble just a point out of the relegation zone.

The Dutch coach, however, remains optimistic.

He said: "I couldn't have asked for anything more at half-time. We knew it would be even harder in the second half because of the quality of players they have.

"If you switch off for one moment they can hurt you, and that's what they did, but there were lots of positives to take from it from our point of view.

"You must always see the results and the performances, they are interlinked.

"Our performances have been really good, but (we) haven't had the results."

Meulensteen, who took over from Martin Jol in December, added: "I think we can survive, definitely. The spirit is good, we have got plenty of quality, and I believe the short time I have been in with these players we are improving all the time, working hard.

"What we need is a break with a run of results, but that's not easy because of the opponents we are facing."