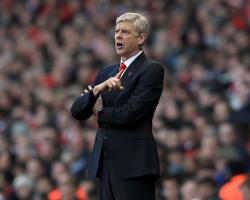 Wenger's side looked to have found form again just at the right time ahead of a crucial run of games, which also sees them take on Monaco for a place in the last eight of the Champions League

Despite both Manchester City and Chelsea crashing out, the likes of Liverpool, West Brom and Aston Villa all still harbour ambitions of going all the way to Wembley, as will Manchester United who tackle Preston at Deepdale in the final fifth-round tie on Monday evening

Wenger said: "Maybe the highest number of teams in the Premier League have gone out, but we still have some big teams in there

Let's wait for the draw."

B efore the visitors could recover, the forward sweetly volleyed home a corner

Giroud, who missed almost three months of the season after breaking his leg in August, reached double figures for the campaign and remains an important part of Wenger's side

"He understands what top-level football demands, works with a great concentration in training and he has improved tremendously on his mobility, his technical quality and of course his body is very strong

He uses it very well," said the Gunners boss

Giroud's position as Arsenal's main striker had been under threat after the arrivals of Alexis Sanchez and Danny Welbeck, but Wenger insists if the France international is named in his starting line-up he will always play through the middle

''All the strikers we have can play in different positions

The only one who can only play centre forward is Giroud, so when he plays the others have to move out wide," added Wenger, who started England forward Theo Walcott on the bench

'He said: 'It could be that the atmosphere (amongst the players) was very exciting and everyone was expecting another win

"The players maybe thought it was going to be easier because we played very well against Manchester City two or three weeks ago."