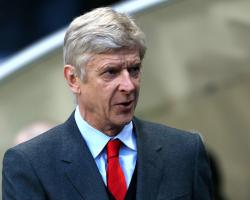 Domestic television rights were sold to Sky and BT Sport for a staggering ÃÂ£5.136bn across three years, with clubs and players set to benefit.

"It's an impressive number and it shows the popularity of the English game," Arsenal boss Wenger said.

"It will contribute to get the best players all over the world to come to England.

"The movement of the players is always linked with the economical and financial power in the countries.

"When I was a coach in Monaco we bought the English players because we were the first to have the television money.

"Today the biggest financial power is in England and the best players come to England."

Wenger praised broadcasters for their role in boosting English football's popularity, but there was a note of caution, too.

He added: "If football is so popular all over the world, the television (companies) in England have contributed to it a lot.

It looks to be more of a calculation of 'we cannot lose this' than 'we want absolutely to grow and get bigger'.

"Today the difference is so big that the English clubs have a power to attract who they want.

"Will that last? That's another question."