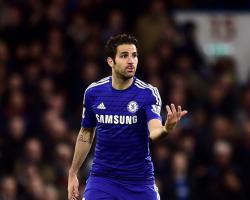 Fabregas, 27, has been integral to the Blues' Barclays Premier League title challenge this season after joining from Barcelona in the summer.

Arsenal had reluctantly sold the Spain midfielder back to his boyhood club for ÃÂ£30million in June 2011 and were understood to have first option should the player come back onto the market.

A potential deal never materialised though as Fabregas - who played more than 300 games for Arsenal after breaking into the first team as a 16-year-old - joined up with Jose Mourinho at Stamford Bridge instead.

It remains to be seen what sort of reaction the former crowd favourite will receive from home supporters on Sunday, but Wenger feels it should not be hostile.

"I want every player to be respected, and Cesc Fabregas when he comes to the Emirates on Sunday to be respected like he deserves," the Arsenal manager said.

"The regret I have is that he wanted to leave here

This club and myself had a very positive influence on Cesc's life, so I would be a bit uncomfortable to have to justify today why he is not here.

"I believe I would rather it was the other way around."