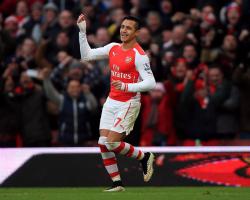 Sanchez has been forced to sit out the last two matches because of a hamstring strain, and Wenger admitted the industry of the Chile forward was missed as his side went down 2-1 in Saturday's north London derby at Tottenham.

The 26-year-old, who has plundered 18 goals since a ÃÂ£32million summer move from Barcelona, is expected to be back in the side for Tuesday night's visit of Barclays Premier League strugglers Leicester.

Wenger revealed Sanchez has been just as big an influence in the dressing room as on the pitch, reminding him of the personality of Wright, who helped drive the Gunners to the 1998 Double and broke Cliff Bastin's goalscoring record along the way.

"Alexis is more with the Spanish players of course, but he is loved by everybody

He is very friendly and bubbly every day," said Wenger.

"He is a bit like Ian Wright, with his enthusiasm

Alexis is quieter than Ian Wright - but that is not difficult and he doesn't get booked!"

Wenger continued: "He is dynamic and does both parts of the game, he wins you the ball back quickly as well, so the transitions are very good from defence to attack and attack to defence

He is important in the team because of that."

Wenger revealed Sanchez was desperate to play through the pain barrier, but insisted there must always be a long-term view weighed up against any potential short-term gain.

"It was difficult for him not to play

If it was the last game of the season he would have played," said Wenger, who expects to be without midfielder Alex Oxlade-Chamberlain for at least another two weeks because of an inflamed groin problem.

"Alexis had a bit of a winter break now that he didn't really want, but he got one and I think he will now be recovered and fit until the end of the season.

"For us it is important that he has no setback as once you go into February, if you have a muscular injury and a guy has a setback, you say 'bye bye' as the season is over as it is six weeks out.

"By the time you come back to your full level it is April and that is why we didn't take the gamble."

Wenger is confident Arsenal can quickly get the poor display at Tottenham out of their system, having gone into the derby match on the back of five straight victories.

Indeed the Gunners could once again leapfrog local rivals Spurs - who travel to Liverpool - and end up in third come full-time on Tuesday night.

Wenger accepted his side paid a heavy price for "too many technical mistakes in the middle of the park" at White Hart Lane and was also less than impressed at the way Harry Kane nodded in a late winner.

Much had been made of Arsenal's supposed new-found defensive steel in the face of opposition possession.

Wenger, though, insisted he expected to see plenty of positive intent against Leicester.

"We scored an early goal (at Tottenham) and subconsciously we accepted to defend - that is not our game," he said.

"We want to all try to have the ball."