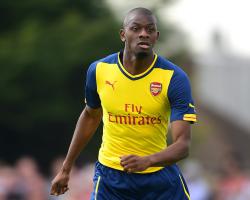 Diaby is one of several players likely to be drafted in by Wenger, who will make full use of the squad ahead of Saturday's north London Barclays Premier League derby against Tottenham.

The 28-year-old has been plagued by injury setbacks since joining Arsenal eight seasons ago, suffering a horrific broken ankle in a tackle from Sunderland defender Dan Smith in May 2006 and most recently surgery following anterior cruciate ligament damage in his left knee which would sideline him for all but the final match of last season.

Wenger, though, believes the fact the France international is even still able to be competitive at the highest level is testament to his inner strength.

He was with us at Villa Park again on Saturday and he will play against Southampton on Tuesday," said Wenger.

"He is a giant, mentally

To do what he has done, with the severe injuries he had, he comes back every time, is dedicated and he deserves a lot of respect."

"I am a huge believer in his quality and I am sad as well that he couldn't show it more.

"If there is some justice, the future will be much better for him."

Wenger confirmed youngsters such as Hector Bellerin, Isaac Hayden, Chuba Akpom and Semi Ajayi will all be given a first-team opportunity in the Capital One Cup, which the Gunners boss has no intentions of throwing to the wind

"We still have a team of experienced players, and we want to do well in this competition," he said.

One player likely to be given a breather, though, is Mesut Ozil.

The German playmaker went some way to silencing his critics with a fine display in the 3-0 Premier League win at Aston Villa, where he scored the first and then quickly set up another for Danny Welbeck.

Wenger, who deployed Ozil in a more central role, was always confident Arsenal's Â£42million man would come through.

"People forget that he played the World Cup and only came back on August 11 and it takes some time to come back mentally and physically to your best," Wenger said.

We had a tough, tough game against Man City on the Saturday, and Tuesday was very short preparation time.

"Everything is analysed today, you had Ozil, you had Yaya Toure, and straight away everyone questions them

But both of them showed on Saturday and Sunday that they are great players."

Wenger added: "I believe as well it is a fact that confidence is a vital factor for everybody, but also the drive you bring into the game.

"If a ball comes out quickly and well from the back, he is always the one who can deliver a quality pass

His quality depends on how well we feed from the back."

Arsenal, meanwhile, confirmed full-back Mathieu Debuchy is set to be missing for up to three months after surgery on damaged ankle ligaments, but England forward Theo Walcott should be in contention again after the international break.