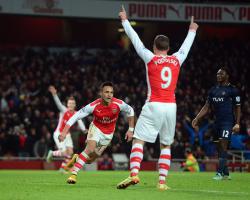 Sanchez pounced in the 89th minute for his 14th goal in 22 appearances since his summer arrival from Barcelona as the Gunners narrowed the gap on the top four to two points.

"Alexis is one of the players who had to dig deep, but he still had such desire to fight

He always finds something special to get a goal," Arsenal boss Wenger said.

He arrived in July and now it's December.

"When you look at the number of goals he has and the impact he has on the team, it's fabulous."

Arsenal benefited from the 65th-minute arrival of Olivier Giroud, whose physical presence made the difference when Saints had been reduced to 10 men after Toby Alderweireld limped off with a hamstring injury.

Arsenal's hopes of exposing Southampton as top-four imposters looked destined to be dashed by a goalless draw until Sanchez's late intervention and Wenger was relieved to be able to reflect on a third successive victory.

"We deserved that because we gave very few chances away and had more chances than Southampton and because we kept a clean sheet," Wenger said.

This was our third game in (eight) days.

We had to be patient and wait for our chances.

"We have the right attitude and a good solidarity in the team, a good focus, and that's a good basis for us.

"It was important to win because we lost our last home game and you could see the crowd was nervous."

Southampton manager Ronald Koeman admitted the departure of Alderweireld with six minutes to go encouraged Arsenal to pour forward in search of the winner.

"For the first hour we were outstanding and our team gave a very good reaction after the loss last Sunday," Koeman said.

"We were unlucky with the injuries and that gave Arsenal the motivation to bring more in the last 10 minutes, pressing with 11 players against 10 players.

If it's a kick on the ankle you can ask them to play on, but it was a hamstring problem

You can't continue with a hamstring injury.

"Our goalkeeper Fraser Forster was outstanding but it wasn't enough to keep a clean sheet."