Wenger hits back at silly remark 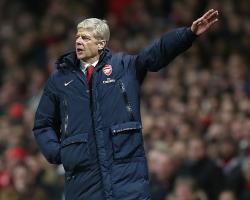 Mourinho on Friday described Wenger as "a specialist in failure'' - referring to Arsenal's eight-year trophy drought - after the Gunners boss implied the Premier League title was Chelsea's to lose.

Wenger insisted his comments stating any team which says they are not in the title race - as Chelsea manager Mourinho has done countless times this season - does so out of fear of falling short of their ambition.

The Frenchman claimed his comments were not aimed at Mourinho and following his side's FA Cup fifth-round win over Liverpool on Sunday he slammed his rival for his controversial riposte.

"I do not want to go into that silly, disrespectful remark,'' Wenger told BT Sport.

"I never spoke about him in my press conference and I will not start.

"The only thing I know is it's more embarrassing for Chelsea than for me.''

Wenger and Mourinho endured a fractious relationship during the Portuguese's first spell and a fragile truce was eroded on Friday.

That is really genuine.

"I love football - and I'm sorry to disappoint you - what's interesting for me is what happens on the pitch."

Mourinho had further to say on the subject following Chelsea's FA Cup loss to Manchester City on Saturday as well, with the 51-year-old pointing the finger of blame at "Monsieur polite" Wenger for their current spat.

The former Real Madrid boss was quoted as saying by several national newspapers: "The only thing I feel is that I was very quiet in my place and somebody spoke not in a nice way about us.