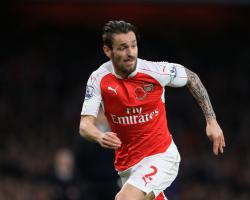 But Debuchy, who has fallen behind the impressive Hector Bellerin in the Gunners' pecking order, subsequently joined Ligue 1 outfit Bordeaux until the end of the season

"You loan players out to clubs who do not have the resources, but not to direct opponents," said Wenger ahead of his side's fifth-round FA Cup clash against Hull on Saturday

"There was nothing shocking in that and it's true, I stand up for that

I can understand it but I found that logical to block the loan."

Meanwhile, Danny Welbeck could be handed a first start since April after recovering from his injury nightmare.

And Wenger believes the 25-year-old has grown in character following his spell on the sidelines.

"It's always a good observation of character and the resilience of a person when they are injured for such a long time," Wenger said of the former Manchester United forward.

"You look at how he resists that stress of not being capable of playing, how much he can respond with the effort he puts into his rehab, and how focused he can be every day when he goes step by step slowly.

Let's not forget that he got injured in April but we prepared to have him back at the FA Cup final.

"He had a huge setback and I think he has become a stronger man with what happened to him."