Wenger keen to focus on the present 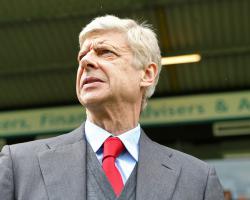 Few could have imagined the wait that would follow the Gunners' penalty shootout victory over Manchester United in the 2005 finale at the Millennium Stadium.

No members of that squad remain as Arsenal prepare to step out in an FA Cup final for the first time since then, with manager Wenger the last remaining bastion.

The Frenchman has come under much scrutiny and pressure during that period due to their lack of silverware, although that long wait for a trophy could come to an end when they take on Hull at Wembley this weekend.

"No matter what the result will be, this club - and this is always most important - can deal with the consequences of any game," Wenger said.

"What is important is that we come out of the game and have the feeling that we gave absolutely our best, our total energy to play at our best and then you always accept the consequences.

"No matter how much we talk about it, you can win and lose but you want to come out of the game feeling you have done the maximum to win and that is what we want to achieve.

"[The drought may make it] a little [more difficult] but at the end of the day once you walk over the line you just focus on your football.

"You don't play with the history, you play with your quality and your desire to play well

We need to just turn up and play well."

Wenger rejected the notion that Arsenal have a "mental block" when it comes to winning trophies, although conceded nerves almost cost his side at the semi-final juncture.

The Gunners required penalties to overcome second-tier Wigan, whose shock win in last year's final against Manchester City highlights how costly complacency can be.

"Yes, there were [nerves in the semi-final] because at the time we were at a low level of confidence because we came out of some bad results," Wenger said.

"We played against a good team

"So we knew we were super favourites, not at our best and that we played against a team who has made some great results.

"I don't believe we need any warning

We know that a final is a final, that Hull is a Premier League team, they can pass the ball, they can create chances.

We just want to focus on that."

Alex Oxlade-Chamberlain and Thomas Vermaelen will be assessed before the match, which is Arsenal's first major final since the League Cup of 2011.

Much like this weekend, Wenger's side approached that game as standout favourites yet Birmingham triumphed 2-1 thanks to a late Obafemi Martins goal, which came after a mix-up between Laurent Koscielny and Wojciech Szczesny.

"Look, you can always slip or have a lack of communication," Wenger said, reflecting on that defeat

"You can never guarantee that will never repeat.

"The only thing is what happened to us was in the last minute of the game and that leaves you very, very little time to respond.

Enjoy it and that is the best way to be at our best.

"The players have learned through every season something but I believe just what we want is to finish the season very well.

"We have this opportunity in the last game of the season in England, it's a big game

Let's go for it and enjoy it."