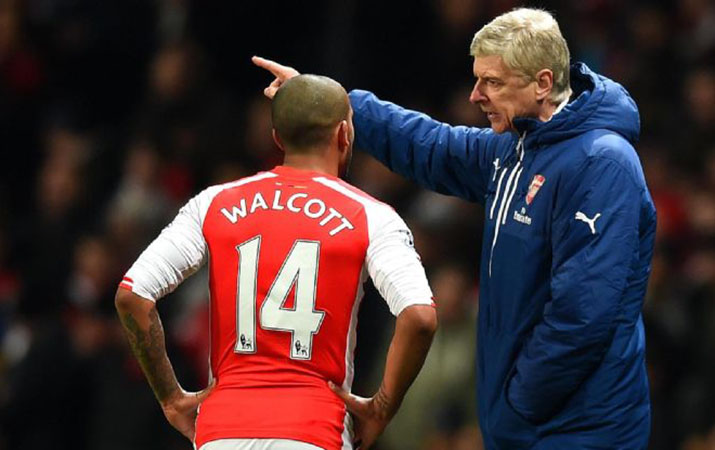 Walcott, who has yet to commit his long-term future to the Gunners, is out of contract at the end of next season and laid down a marker to be included in the starting XI for the FA Cup final against Aston Villa at Wembley with a blistering first-half display from a central striker's role.

The England forward, who has battled back from a serious knee injury, cracked in the opening goal after just four minutes, and then quickly doubled Arsenal's lead before Jack Wilshere, on his 100th league appearance, volleyed in a superb third.

Walcott completed his hat-trick on 37 minutes with a close-range tap in to end the match as a contest before half-time.

Wenger sees no reason why Arsenal should not be able to conclude successful talks with representatives of the 26-year-old, who has been at the club since joining from Southampton when still a teenager in January 2006.

We are in negotiations

We are starting to speak with his agent, and that is before he had made his hat-trick," said Wenger, who joined the rest of the squad on the pitch for a lap of appreciation having secured third place and with it automatic qualification for the Champions League.

"Theo is a good scorer, but he has been out for a year

A year in a football is a long, long time, and it takes time to be back at your best, (to regain) your sharpness and confidence."

Wenger continued: " I have always said that he can play in the middle because he has good movement and good finishing

He did that well today

"I hope he stays free of injuries now, he has had a few doubts on the injury front, and that is never good.

"You have to be consistently present to express your full potential."

Arsenal had failed to score in their last three home games, but blew West Brom away before the visitors could bed in.

"We have played some quality games, but I think recently we couldn't score

Today every chance we created we scored in a convincing way," said Wenger.

"The first half was one of top quality

We tried to keep it going in the second, but we eased a bit off and we were less than convincing.

"Overall, we did the job we did well and we finished the season on a high

Now we can focus on the FA Cup final and come back next season."

Arsenal midfielder Alex Oxlade-Chamberlain made a cameo appearance for the final 13 minutes, having been out since early March, and now could also be in contention for Wembley.

One more week of preparation will help him," said Wenger.

Gareth McAuley headed a consolation for the Baggies just before the hour.

He said: "If anybody needs to take any criticism then it's most probably me

The Chelsea game took a lot out of the players, so maybe I should have freshened it up as they might have run out of steam a little bit."

Pulis may have performed another minor miracle in keeping West Brom up bearing in mind the state the club was in when he took over in January, but he is not intending to take any hard-earned rest just yet.

"Look ahead to next season? I am looking ahead to 6am to get down to Tower Bridge to jump in a boat to row across the Channel, with seven days in a boat now for charity," he said.

Pulis added: "This has probably been the toughest job I have had for all sort of reasons, but the players have been fantastic because to get to 44 points, to finish 13th is brilliant, it's absolutely brilliant and they deserve a lot of credit."