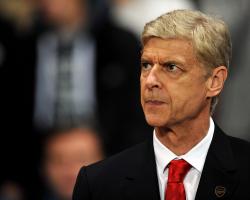 The Gunners boss used his address at Thursday's Annual General Meeting at the Emirates Stadium to reiterate his belief in the squad's ability to build on their FA Cup success of last season, which ended a nine-year wait for silverware.

Wenger also accepted Arsenal need to bring in more cover, specifically at the back, given a growing injury crisis which has seen France defender Laurent Koscielny suffer from an inflamed Achilles tendon on which there is no specific time frame for recovery.

The Gunners boss, who spent some ÃÂ£30million on Chile forward Alexis Sanchez after the World Cup and also brought in England forward Danny Welbeck from Manchester United on deadline day, said: "I believe we have done remarkably well on the transfer market

I agree we could have bought one more player, (but) we did not find

"We will try to rectify that, because we are a bit short with the injuries we have (defensively), and overall I think we will rectify that in the transfer market in January."

Much has been made of Arsenal's supposed war chest, with latest published figures of the parent holding company revealing more than ÃÂ£200m in cash reserves.

Chief executive Gazidis, however, used Thursday's shareholders forum to dispel any hysteria around Arsenal just not being willing to spend.

He said: "There is quite a lot of inaccurate and superficial analysis about the cash that we have available for investment in the squad

That leads to stories for some unspecified reason, we are hoarding a vast cash balance and that is simply not the case.

"There are obvious reasons why we don't broadcast to the world what our player spending position is, but the position is much more complex than is broadly understood."

Gazidis went on to explain some ÃÂ£99m of "future spending has to be funded from the cash balance", with ÃÂ£53m committed on new transfers and ÃÂ£29m still to pay on previous deals while a further ÃÂ£17m is for "performance related costs".

"The second thing to understand is that we have to, always, keep a substantial amount of cash in reserve in order to comply with our debt obligations.

"Most of the remaining cash is needed to run the club across a full season with all the costs, including player salaries, associated with that.

"We do try to keep a reasonable amount of cash available for future investment in the team and we think it is always wise, if possible, to have something in reserve.

"We don't publicly disclose that amount because it is obviously commercially and competitively sensitive, but I am afraid it is nowhere near the numbers which are quoted which give you some degree of dissatisfaction."

Wenger continues to stress there were no players available which he felt would further strengthen the team during the last window, when Arsenal rejected a chance to bring former captain Cesc Fabregas back from Barcelona.

The midfielder eventually signed for London rivals Chelsea, having a hand in Arsenal's 2-0 defeat at Stamford Bridge before the international break.

Chairman Sir Chips Keswick was asked directly by one shareholder whether funds had been made available to Wenger in order to buy a defender.

He made it crystal clear where the decisions on football matters rested at the Emirates Stadium.

"I don't think that my wish or intention to double guess what Arsene Wenger wants to do - as you know, your board backs him 100 per cent

If he has a plan, we back him, if he doesn't have a plan, we keep quiet," the chairman said.