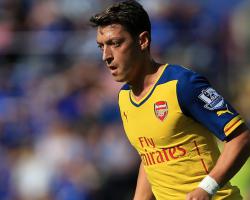 The German World Cup winner, who is Arsenal's record Â£42million signing, has come under fire following a couple of uninspiring displays, culminating in the 2-0 Champions League defeat away to Borussia Dortmund on Tuesday night.

Wenger, though, rejected constant criticism of the 25-year-old, who remains an integral part of his plans.

"Why should he be a scapegoat? For what? We've lost one game since April 1

Let's be realistic," said Wenger, whose side travel to Aston Villa on Saturday.

We had very difficult games against Besiktas

I don't know - a scapegoat for what?"

Wenger continued: " What is difficult to manage today is that everybody knows absolutely everything and everybody judges people definitely on one game

They have to accept that

At the end of the day, somebody always has to make a decision and that's the guy who is responsible."

Wenger called for Arsenal fans to get behind the German, who was signed from Real Madrid on deadline day in September 2013.

"They should not be concerned and just support him

I understand that you want your best players always to make the difference in every single game and we all go through periods where we are a bit less good," he said.

A club is a union between players, supporters and directors

You have to be united and sometimes go through periods together where it goes a bit less well."

Jack Wilshere's ankle knock is not serious, but the club are still waiting on news of the injury to full-back Mathieu Debuchy, who was carried off against Manchester City on a stretcher.

"He has an exploration of his ankle on Friday night and they go in and look how the ligament is damaged, and after that we know if he does need surgery," said Wenger, who indicated Arsenal may yet move for a free agent defender as cover, having been linked with Nigeria international Joseph Yobo.

"If he doesn't, it'll be six weeks, if he does need surgery it'll be three months

At the moment we don't know."

Arsenal are unbeaten in the Premier League, but have now drawn three matches.

Wenger said: "We want to respond (at Villa)

We had a disappointing performance more than a defeat.

"I think what was important is that we came out of Saturday's game feeling that we had a very good performance and on Tuesday night we didn't, so it's important we come back.

"We have confidence in our strengths and we want to show that we can perform in the game that is important on Saturday."