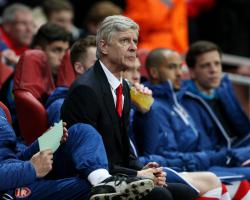 The Gunners saw their Champions League hopes suffer what appears to be a fatal setback following a 3-1 home defeat by Monaco in the first leg of the last 16 tie on Wednesday night.

The lacklustre performance of Wenger's side drew plenty of negative headlines and sound bites, while Piers Morgan took to Twitter to defend himself against claims of not being a proper Arsenal fan by former Double winner Bob Wilson, who had gone on radio to support the manager as his position was again called into question.

Wenger will look to quickly lift the mood at the Emirates Stadium against Everton on Sunday, although Arsenal must do without England midfielder Jack Wilshere, set for a short spell out after a minor procedure to remove a stud in his ankle which was causing some discomfort.

"What is hurting is the defeat more than the criticism

I do not say I am immune to it

I love to win and when I don't win, I am hurt of course," said Wenger, whose side head into the weekend's games in third place in the Barclays Premier League.

"We have to live with that (criticism) and I think what is important is to give a strong response.

"We are a big club - that means we are a club who interest many people and that gives us a stronger responsibility.

"Of course when you come out from a disappointing game like Wednesday night, you don't expect people to applaud

It is absolutely normal that we get criticised."

Former Arsenal goalkeeper Wilson, 73, stated fans should support the club "through thick, thin, laughter, smiles and tears", although there were many who jeered at the final whistle on Wednesday night after watching Arsenal concede a killer third goal deep into stoppage time having just pulled back to 2-1 through Alex Oxlade-Chamberlain.

Wenger said: "Of course (the fans must stay behind the team), you are not a fan for one game you are a fan of the club

No matter how good your team is, how big your club is, you play 55 games per year and you have moments where you are disappointed.

"But we are third in the league, we are on a strong run, there is no obvious reason (to be against the team), we don't play not to go down.

"We want to finish the season in a strong way and keep in this competition as well."

Wenger added: "We are in a strong run in the Premier League and we have to respond to that disappointment in a strong way on Sunday afternoon, that's all we can do."

Defender Per Mertesacker claims Arsenal must believe they can pull off their own "miracle night" in Monte Carlo next month to overturn the deficit.

Wenger said: "We are still in the competition, that's what we can say

We have a difficult task, but it is still feasible.

"We are still in the Champions League - don't rule us out too quickly."

Wenger confirmed he expected Wilshere's absence to be short, the midfielder having only just recently returned to the squad after ankle surgery following injury against Manchester United on November 22.

"Jack Wilshere had a little surgery to take his two buttons (studs) off his ankle because they were irritating him, but it's a very minor procedure

He'll be out for a few days," the Arsenal boss said.

"It was irritating his ankle and they had to take it off."

Asked if this was a setback for the 23-year-old, who has had a string of fitness problems, Wenger said: "No, it was planned to be done at the end of the season, but because he had an irritation with it, we decided to do it now