Wenger - no one invincible now 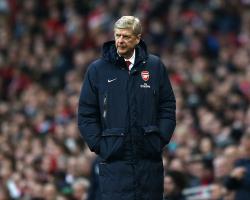 The Gunners head to Liverpool for Saturday's lunchtime kick-off looking to maintain a slender one-point lead at the top of the table over City, who saw their 100 per cent league record at the Etihad Stadium ended by a dogged Chelsea display.

Despite the plaudits being given to Manuel Pellegrini's free-scoring side over the last few weeks, Wenger had continued to stress there were still vulnerabilities.

Those were exploited to perfection following a well-organised performance by Jose Mourinho's team and Wenger accepts if any of the title challengers are not completely focused over the remaining 14 matches, then they can all come unstuck.

"I told you that one month ago, and you did not believe me - there is no invincible team, I think, because there are so many quality teams in the Premier League," said Wenger.

"It is just how close you are to your best every time which decides the game."

After Chelsea's win on Monday night, Mourinho played down Chelsea's own title ambitions, claiming the contenders over the run-in were "two horses and a little horse that still needs milk and to learn how to jump".

Wenger, though, is not about to let himself get sidetracked by any form of mind games.

"They (Chelsea) are in there, of course

"We focus on our side and do not listen too much to what people say.

"What is important is it is a period where you show up with good performances."

Arsenal are now heading into a run of fixtures which could well shape the destiny of their own campaign, with Manchester United set to come to the Emirates Stadium next week ahead of an FA Cup fifth-round date against Liverpool and the first leg of the Champions League last 16 clash with Bayern Munich.

"This is a massive month for us," said Wenger.

"When you are in a good position to fight for something, the closer you get to the end of the season, every game becomes vital and every point is important.

"We have fought very hard up until now to be in this position, so let's enjoy it and do our best."

Wenger hopes England midfielder Jack Wilshere can return from an ankle injury to help his side make a "big statement" at Anfield.

Wilshere should be fit having sat out last weekend's 2-0 win over Crystal Palace, which would be a welcome boost following suspension to Mathieu Flamini while both Aaron Ramsey and deadline-day loan signing Kim Kallstrom are still several weeks away from recovery.

"In the big games it is always decided by having the complete squad available," said Wenger.

"(It's important to have) as many top players as possible because most of the time these games are decided by players who come on or strong players who have a big statement in a big game."

Arsenal tackle Liverpool looking to keep striker Luis Suarez quiet, a player they mounted a protracted and ultimately failed ?40,000,001 bid during the summer.

Suarez has gone on to bag 23 Premier League goals for the Reds, as well as secure a lucrative new contract.

Wenger, though, insists there are no regrets over Arsenal's failure to land the Uruguay forward.

"He was never our player

It is just a situation that did not come off and that is it," said Wenger, who ruled out going back in for Suarez again in the summer.

"For us the important thing is to win the game

What happened in the summer is nothing to do with that.

"If you want to win the game what is for sure is that he is one of the players that you have to keep quiet."