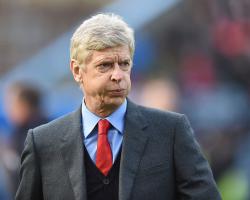 The Gunners take on the Royals at 5:20pm which will be shown live on the BBC

However, only some 10 minutes later, the Premier League leaders will kick off on Sky Sports against third-placed United at Stamford Bridge.

Under Premier League broadcast deals, the selection of Chelsea versus Manchester United was set back in February, when the FA Cup semi-finalists were still unknown

The Football Association and rights holders BBC and BT Sport decide independently on the weekend slots for their competition.

Despite the fixtures timings not playing out as all broadcasters may have first hoped, Wenger still feels more consideration should have been made to keep the two high-profile games separate.

There is a bit of conflict there that is difficult to understand," said Wenger at his pre-match media conference on Thursday morning.

"Something should be done about it.

"I am surprised that they did not analyse that in television deals because basically what happens there, it is something that should have been planned, that two television channels who pay a lot of money for football have conflicted interests in promoting games

That inside the country shouldn't happen."

Wenger added: "You would like it (FA Cup) to be the unique competition that is played, especially a semi-final and a final, you would want it not to conflict with other competitions."