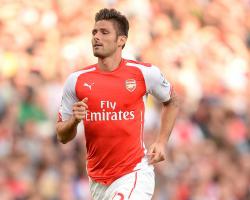 Giroud has been ruled out of Wednesday night's Champions League qualifier against Besiktas with the shin problem sustained in Saturday's draw with Everton.

It is feared the 27-year-old could be absent for two to three months, robbing Arsenal of their first choice striker just three games into the season.

"On Sunday he had a medical check and he needed to have further investigations," said Wenger, who revealed an announcement will be made over his fitness on Wednesday afternoon or evening.

"The first news wasn't fantastic, but I'm not a doctor so I wait for tomorrow's (Wednesday's) complete examination and decision over how long he'll be out for.

It's sad for us, but for the moment we are focused on the game."

The Frenchman, however, refuses to panic buy before the window closes on Monday.

"We have plenty of players at centre forward

In England as soon as you have a problem, people want you to buy," he said.

"Unfortunately, I can give you some clubs that every time they lose a game they say they might need to buy more.

"We are 24 hours from a big game and our focus is more on that than the transfer window.

"I've learnt one thing in our job - you say nothing categorically."

Summer signing Alexis Sanchez could operate as the lone striker against Besiktas, although doubts have been raised over his ability to perform the role.

Sanchez was replaced at half-time at Goodison following an ineffective 45 minutes as the focal point of Arsenal's attack, but Wenger is convinced he can operate as more than a winger.

"You do not convict a player on one half

When you're 2-0 down you don't play counter attack."

Yaya Sanogo, Lukas Podolski and Joel Campbell are also options, although it is Sanogo, who missed out against Everton because of a hamstring injury, who is most likely to start.

Wenger, who ruled out Podolski leaving in the transfer window, is confident he has the options to cover for Giroud's absence in the second leg of the qualifier at the Emirates Stadium.

"Yes of course, why should I not have that confidence?" Wenger said.

"Nobody can image that when one player is missing, no matter how big the player is, the team can't win a game any more."

Arsenal are seeking a 17th successive season in the lucrative group stage of the Champions League, but Wenger insists it would not be a financial disaster should they fail to qualify.

The first leg finished in a goalless draw in Istanbul.

"It will affect us because we'll have less income, but it will not affect our balance sheet in a dramatic way because we can survive without that," Wenger said.

"We want to be in the Champions League because we want to play top level football.