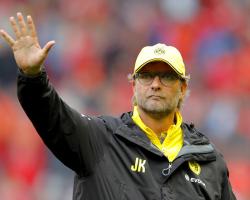 Klopp insisted on Wednesday that he had had no contact with any clubs, but stressed he did not plan to take an extended time-out from the game after announcing that he will end his seven-year spell at Borussia Dortmund in the summer

The German has been installed as favourite to replace the under-fire Manuel Pellegrini at Manchester City, but Wenger was keen not to add fuel to the fire when quizzed on the matter.

"I'm not an agency to place managers and I like every manager and respect everybody, but I find that circus a bit ridiculous," the Frenchman said

On whether Klopp would suit Arsenal, Wenger said: " I already answered this question."

"It's down to every club to make the right decision and to respect Dortmund," he said

"Dortmund is a massive club and will survive, and has the ability to keep their best players.

"They have a big history linked with great results and great achievements, so I don't think that will stop for Dortmund."

Klopp has enjoyed a hugely successful spell in charge of Dortmund since taking over in 2008, leading the club to two Bundesliga titles, DFB-Pokal success and the Champions League final

This season has been more of a struggle, with the club battling it out at the bottom end of the league for much of the campaign and currently sitting 10th

Asked about any advice he would give to foreign managers heading to the Premier League, Wenger replied: "Try to get your ideas through and adapt as well to the local culture, and respect it."