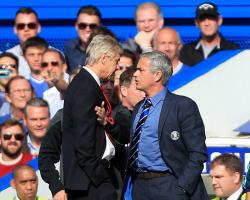 Some Gunners fans chanted "boring boring Chelsea" during last weekend's goalless draw at the Emirates Stadium, which moved the Blues a step closer to the championship for the first time since 2010.

In his post-match press conference, Chelsea manager Mourinho responded by turning the tables back on Arsenal, saying: "You support the club and you're waiting, waiting, waiting for so many years without a Premier League title, so that's very boring."

Those comments did not sit well with the Arsenal manager, who was given an opportunity to respond at Friday morning's media conference ahead of the match at Hull on Monday.

When asked what he thought of Mourinho's post-match statements, Wenger replied: "The biggest thing for a manager is to respect other managers

Some people have to improve on that."

Asked if Mourinho should conduct himself with more dignity, the Arsenal manager answered: "Look, everybody lives with his own internal problems and I live with mine

Wenger has endured his fair share of touchline bust-ups down the years, the fiery relationship with former Manchester United boss Sir Alex Ferguson the subject of many a back page while earlier this season the Frenchman had to be separated after squaring up to Mourinho in the technical area at Stamford Bridge

The 65-year-old, though, believes coaches must eventually put a distance between professional and personal disagreements.

He added: "You can have incidents with other managers sometimes

It gets a bit heated when you fight directly with them, but in the end I believe time heals and the important thing is to respect each other as much as you can."