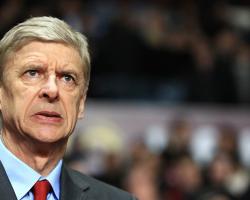 Chelsea boss Mourinho said last week that the Gunners get a certain "influence" when it came to their schedule, something Wenger was eager to refute on Monday morning.

"It is simple - look at the fixtures and analyse it. I trust you will give an objective view," the Arsenal boss said.

"You will see Arsenal are behind all the other teams. In the last five years all the objective studies that have been made show Arsenal had less rest than any other team in the top four.

"That is fact. It has nothing to do with my opinion. It is an independent company that made (the study) that shows Arsenal had less rest than any other team in the top level."

It is understood the study Wenger was referring to was internal analysis of Arsenal's fixture programme.

Wenger cited his side's hectic schedule just before Christmas when they played at Manchester City on a Saturday lunchtime following a midweek European trip to Napoli, both of which ended in defeat.

Mourinho's comments about Arsenal fixtures came in response to criticism from Wenger about Chelsea's decision to sell Juan Mata to Manchester United.

Wenger insisted the war of words was not part of any mind games campaign on his part, with his team one point ahead of Manchester City and two clear of Chelsea going into the midweek Premier League programme. The Gunners travel to Southampton on Tuesday night.

"It is not mind games. It is opinions," Wenger said.

"But I don't live with opinions, I live with facts. and the facts don't depend on me or Mourinho.

"It is depending on objective analysis. A day is 24 hours and you count how many times you have rest between games.

"I didn't make the study, it was made by an independent company. I cannot influence that."

The thorny matter of fixture congestion will raise its head again after Arsenal were drawn against Liverpool in the FA Cup, with the tie likely to be selected for live television coverage.

That clash, slated for the weekend of February 15 and 16, will come just days before Arsenal's Champions League last 16 first-leg clash with Bayern Munich at the Emirates Stadium and after vital Premier League games against both Liverpool away and Manchester United at home.

Such testing periods have broken the Gunners in the past, but Wenger has told his players to absorb the occasion and pressure this time around.

"It is an interesting (FA Cup) draw and a difficult one; we have a little advantage by playing at home," he said.

"Overall it's a great difficulty and we will try and absorb it and come out in a positive way.

"(There are) plenty of big games. It means the squad will need to be highly focused, (it is) a massive challenge and we are confident we can do that."