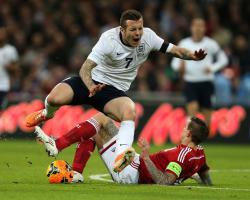 However, there is still reason to be positive after Arsenal recovered form to get ahead of Everton in the race for Champions League qualification, with a place in the August play-offs secure should they win on Sunday or indeed before if the Toffees are beaten by Manchester City on Saturday.

And Arsenal will contest the FA Cup final against Hull at Wembley on May 17 as Wenger aims to deliver a first trophy in almost a decade.

Nevertheless, the feeling of missed opportunities continues to sit uneasy with the Frenchman, who saw his team hit by injuries to key men like Theo Walcott, Aaron Ramsey, Jack Wilshere and Mesut Ozil.

"When we came out of Christmas, we were in a strong position and what you want then is to have your strong players available in March and April

We had too many injuries," Wenger said.

"It is very, very difficult - you can have one or two, but after that when you have too many injuries you always have to play the same players and that is detrimental to the efficiency of the group.

"The regret we have is that too many players were out at the same time between Christmas and April."

Arsenal - who lost heavily away to Manchester City, Liverpool and then Chelsea, thrashed 6-0 in Wenger's 1,000th match - are seven points off the pace, having at one stage been well clear themselves.

Wenger acknowledges just being able to turn the draws at home against Everton, Swansea and Manchester City into victories would have seen them still have a fighting chance of the championship.

"The restriction we had was in the big games, when we only made draws and not wins in some of them, that is where the missing points are at the moment because we are very close to the top," Wenger said.

"Maybe one or two wins at home would have made that difference.

"The regret we have of the season is that we have been remarkably consistent, (but) it is against the teams who did not fight for the Premier League title - and especially away from home in some of the big games - we could not claim the points."

Midfielders Jack Wilshere and Alex Oxlade-Chamberlain will again be missing on Sunday because of injury.

Wilshere is closing in on a return from the fractured foot he suffered while on friendly international duty against Denmark on March 5.

The combative midfielder had originally been expected to be in contention this weekend, but now the final match at Norwich looks an outside possibility at best ahead of the cup final.

England manager Roy Hodgson indicated he would have no qualms about naming Wilshere in his 30-man squad, and, given there are three warm-up matches and a training camp, he feels the 22-year-old will have enough time to get himself in shape ahead of the Group D opener against Italy in Manaus on June 14.

Wenger said: "It is not a gamble if he is completely fit

It is a strengthening of the (England) team.

"If there was a medical doubt then, yes, it would be a gamble, but I think he will be completely safe and on that front medically he should be all right."

Oxlade-Chamberlain is another Arsenal player hoping to be on the England jet to Brazil.

The pacy midfielder missed Monday night's 3-0 win over Newcastle at the Emirates Stadium because of a niggling groin problem, and Wenger maintains his return will not be rushed.

"Oxlade-Chamberlain at the moment has an inflamed groin

We will see how he progresses," the Arsenal boss said

"For the World Cup, he should be okay

For us, will he come back for the end of the season? I don't know."

Right-back Bacary Sagna has a knee problem and so will be assessed ahead of Sunday's game.