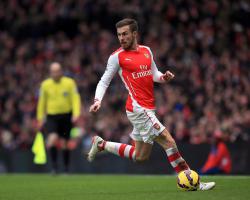 Ramsey's promising career has been punctuated by injury.

The Wales midfielder was a substitute for Tuesday night's Premier League defeat of Leicester, but was replaced after only nine minutes due to a hamstring problem.

"We haven't found the underlying reason," said Wenger, speaking ahead of the holders' FA Cup clash with Middlesbrough on Sunday.

"There is an underlying reason that is medical or bio-mechanical, because he's a guy who is serious, works hard.

"There's no obvious reason why he should have muscular injuries."

Wenger played down the severity of the problem which is expected to keep Ramsey out for a fortnight and insisted Arsenal's training methods are sound.

"It's not a major injury

"We have individualised training

I don't think that is any special case that has been neglected."

Alexis Sanchez may also be absent for Sunday after receiving a blow to the knee against Leicester, while Wenger may have midfielder Jack Wilshere available after a lengthy spell out following ankle surgery

"Alexis Sanchez is still not able to go out (to training)

He could be short," Wenger added.

"Jack Wilshere is back in normal training but he has been out for four months and misses competition.

"He worked very hard, focused, committed, but it will take him a while to get back to a competitive level."

"The closest of the three is Chamberlain," added Wenger, who is also without Abou Diaby (calf).

The others are a bit longer."