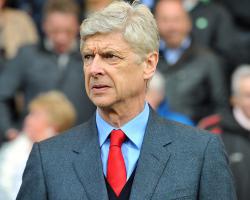 The Gunners head north looking to put the disappointment of Monday's 1-0 home reverse against Swansea behind them and repeat last month's FA Cup quarter-final triumph, in the process earning a first Barclays Premier League win at Old Trafford since September 2006.

Arsenal are currently two points clear of the Red Devils, so, if Wenger's men can avoid defeat this weekend, it would leave them all but guaranteed third place, while victory would certainly consign Louis van Gaal's side to the Champions League qualifiers.

Wenger, though, believes Arsenal can lay down a marker for the challenges ahead next season with another strong performance in Manchester, having also beaten City away earlier in the campaign.

"You expect a game of quality first and we want to bounce back from our defeat against Swansea by putting in a good performance in straight away, and getting a good result out of that," Wenger said.

"Any result will be a positive result

A draw or a win would be great for us."

Wenger, who confirmed former United striker Danny Welbeck was expected to miss Sunday's game through injury, continued: "First of all we can mathematically put a distance between them and us in the top four and basically secure the top three

"Also, we can make a symbolic statement because we won over there in the FA Cup, so to reproduce that would be psychologically important.

"Overall our recent away form has been very strong and that is always a sign of a team who is in progress."

The Frenchman added: "It is not especially a message to anybody, (but) to do it again would convince us more that we have the strength and can be even stronger next season.

"In the recent years it was a difficult ground for us and that is what we want to show, that we have made progress."

Wenger is in no doubt of what it means to avoid another unsettled build-up to the new domestic campaign - which kicks off again at the start of August.

"It is very important for your season preparations to not have that kind of stress over your head from the first day you start again - it is vital," he said.

"We know what it means and we know it is always tricky because you can play against teams who are in the middle of their championship when you are in preparation.

"The consequences are always dramatic if you don't qualify."

Wenger is expected to strengthen the Arsenal squad in the summer, and has been linked with a move for Chelsea goalkeeper Petr Cech, who is expected to leave Stamford Bridge.

The Gunners boss, though, played down suggestions any move was imminent.

"We are not interested in anybody at the moment," he said.

Asked by Press Association Sport would he want to sign Cech if the player was available, Wenger replied: "I don't deal with the 'if'."

Pressed as to whether he felt Arsenal needed a goalkeeper like Cech, Wenger answered: "We have world-class goalkeepers - we have got three."

Captain Mikel Arteta is still not match fit, but is expected to agree a contract extension for next season.

"It is possible, yes," Wenger confirmed.